Welcome to the Stations of the Cross audio tour at the Smithsonian American Art Museum (SAAM), developed by Victoria Emily Jones at ArtandTheology.org.

Originating in the thirteenth century, the Stations of the Cross is a Christian devotional practice whereby participants immerse themselves in the story of Jesus Christ’s final sufferings by metaphorically journeying with him from his trial to his entombment. The road between is known as the Via Dolorosa (“Way of Sorrows”) or Via Crucis (“Way of the Cross”).

In this eighteen-stop tour we will walk this road with Jesus, recognizing along the way the many other paths of sorrow that were traveled in America’s history and that are still being traveled today. Migrant workers, soldiers, prisoners, victims of racial discrimination and violence, the poor and the homeless, the grieving, and the mentally ill are among the many people we will meet through these paintings, sculptures, and mixed-media works that bear witness to human suffering.

The American novelist and social critic James Baldwin said of Beauford Delaney, one of the artists on our tour, “The reality of his seeing caused me to begin to see.” That is my hope: that as we encounter these visual narratives of suffering from our nation’s past and present, we will begin to see. This tour obviously doesn’t cover all the oppressed groups in the US, but this is a starting point for further conversation, discovery, intercessory prayer, confession, and action.

My other hope is that we will be led to a deeper engagement with the biblical narrative—with Jesus’s way of sorrows and why he walked it, what it achieved.

Jesus began his public ministry by reading these words from an Isaiah scroll at his local synagogue at Nazareth:

The Spirit of the Lord is upon me,
because he has anointed me
to proclaim good news to the poor.
He has sent me to proclaim liberty to the captives
and recovering of sight to the blind,
to set at liberty those who are oppressed,
to proclaim the year of the Lord’s favor.

Then, as Luke 4:20–21 tells us, “he rolled up the scroll and gave it back to the attendant and sat down. And the eyes of all in the synagogue were fixed on him. And he began to say to them, ‘Today this Scripture has been fulfilled in your hearing.’” This was a very bold move: here, he is claiming to be the messianic servant of the Lord prophesied about in Isaiah 61, who would bring spiritual and, ultimately, material salvation to the world. But the cost of this salvation, the Hebrew prophet tells us, is suffering; the messianic servant must suffer and die. “He was pierced for our transgressions; he was crushed for our iniquities; upon him was the chastisement that brought us peace, and with his wounds we are healed” (Isaiah 53:5).

Below you will find eighteen audio tracks of art commentary available for free streaming or download, as well as transcripts and artwork locations. If you are taking this tour virtually, you can click on any of the featured images to jump to that object’s museum page, where you can zoom in on details.

As you walk this Way of Sorrows, beholding the sufferings both of Christ and of those he came to redeem, may these artists’ seeing help you to see.

VISITING THE MUSEUM: The SAAM is open daily from 11:30 a.m. to 7 p.m., and admission is free. Its main building is located on the National Mall at 8th Street NW and F Street NW in Washington, DC—conveniently, right next to the Gallery Place–Chinatown Metro stop (on the Green, Red, and Yellow Lines), and within a few blocks of several (paid) parking decks.

Though all these artworks are currently on display, the museum cannot guarantee that that will be the case for the entirety of Lent (in the Luce Foundation Center especially—the museum’s visible storage area—objects tend to move around frequently and unexpectedly). If you notice that any have been temporarily removed, please notify me, and remember that they can still be enjoyed digitally on the SAAM website.

LISTENING OPTIONS: You can stream the audio commentary on this webpage or through the SoundCloud app (available for free download from the iTunes store or Google Play). Free Wi-Fi is available in the Luce Foundation Center, where the majority of tour stops are concentrated, but not in the galleries, so if you prefer to listen offline, you can sign up for a free 7-day trial of SoundCloud Go or download the individual tracks. Be sure to bring your own headphones so that you do not disturb other viewers.

MAPS + PRINTABLE GUIDE: You’ll want to grab an official Visitor Map from the Information Desk in the front lobby to help you get around, but in addition, here is a museum layout marked with the approximate location of each station, followed by a printable guide: 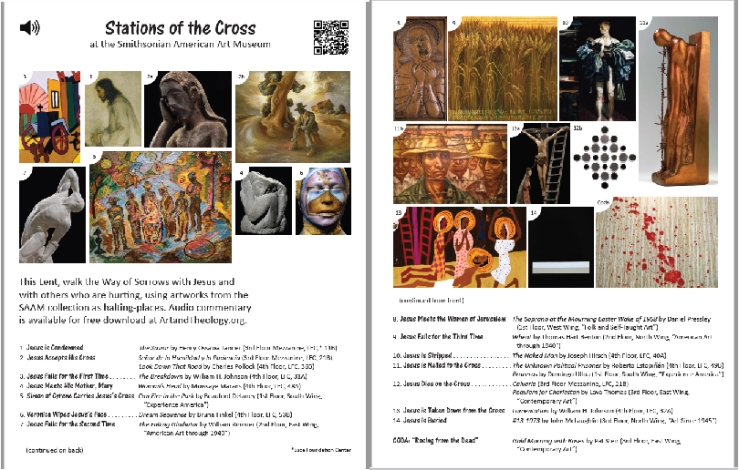 STATION 2. Jesus Takes Up His Cross 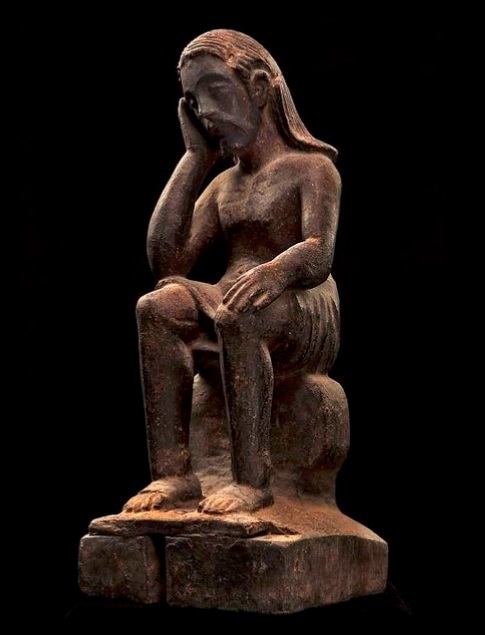 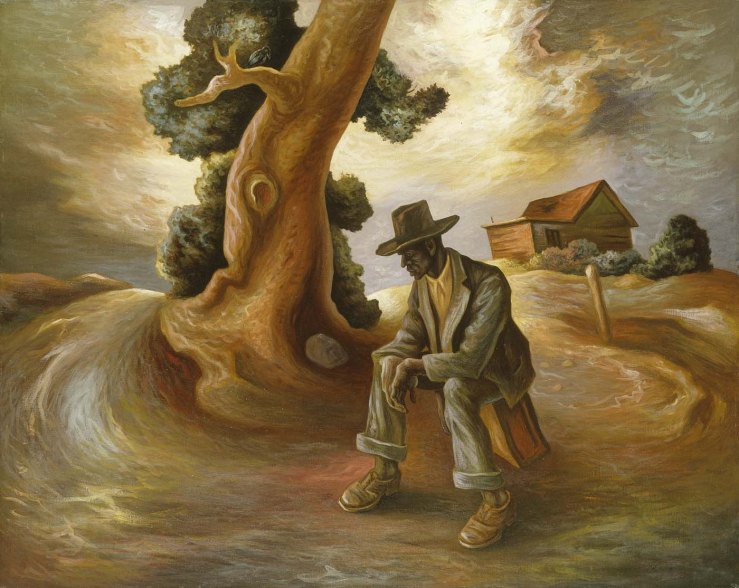 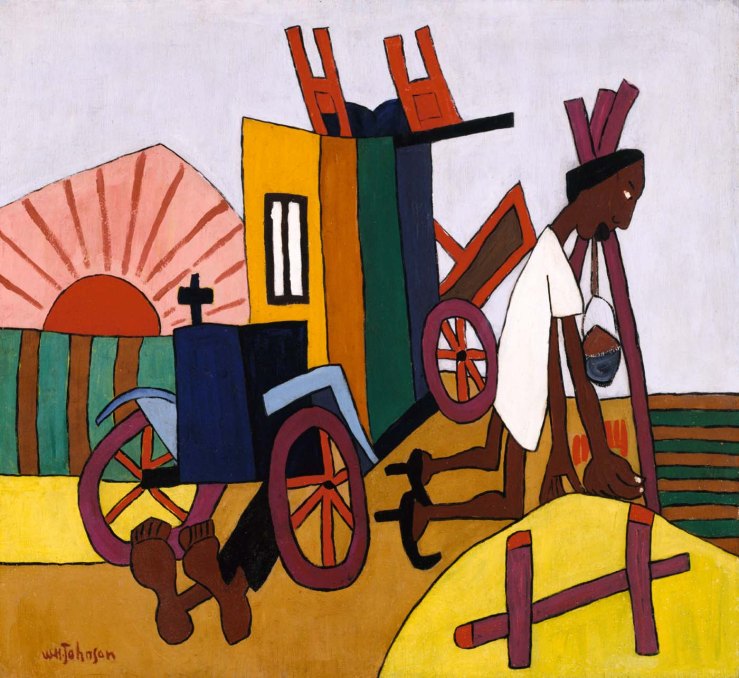 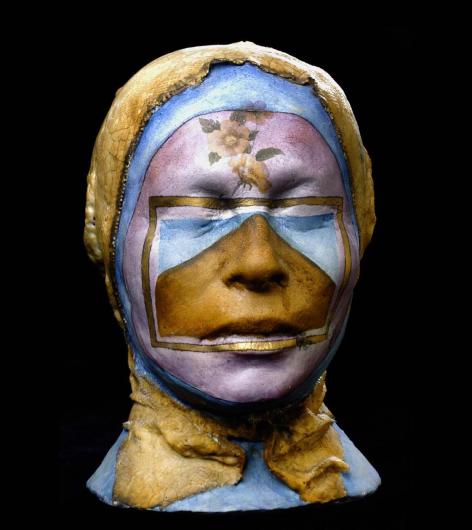 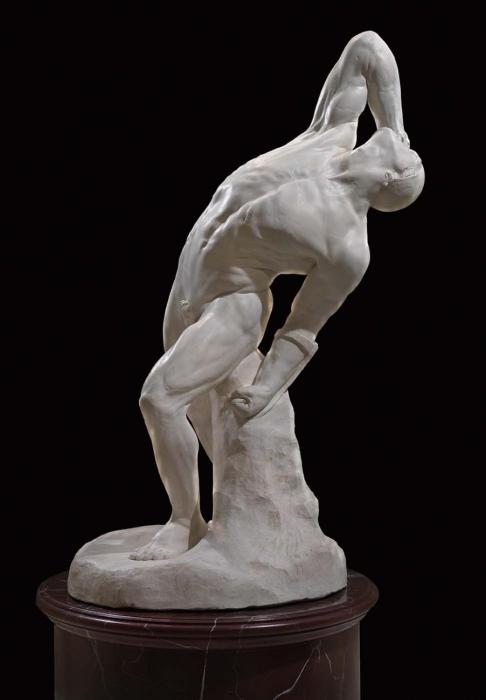 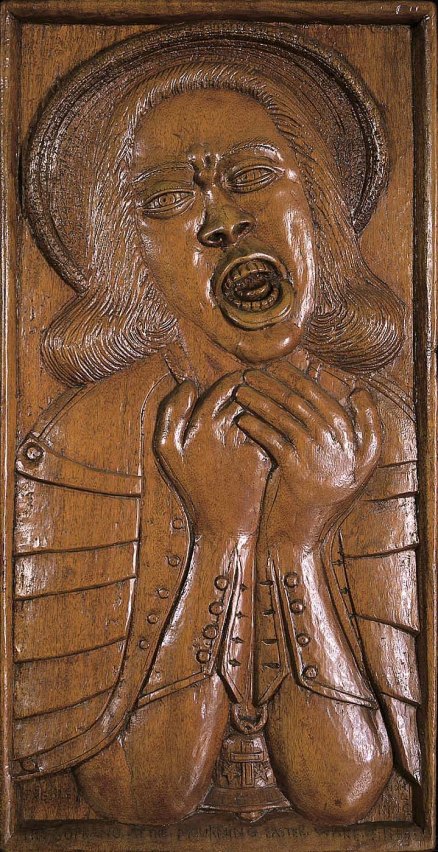 STATION 11. Jesus Is Nailed to the Cross 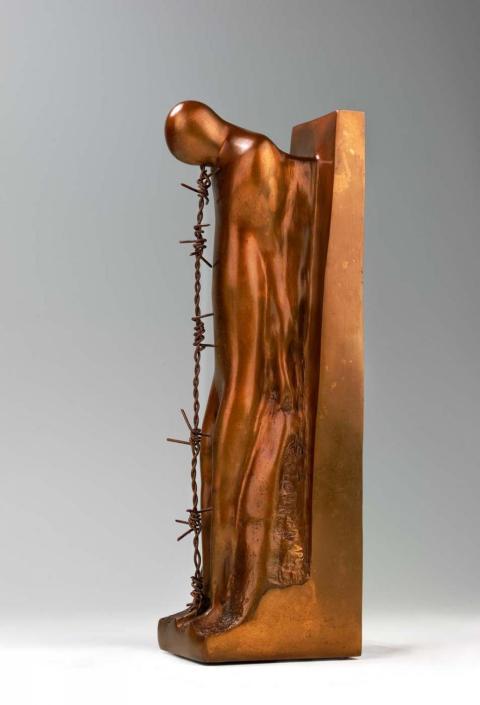 STATION 12. Jesus Dies on the Cross

STATION 13. Jesus Is Taken Down from the Cross 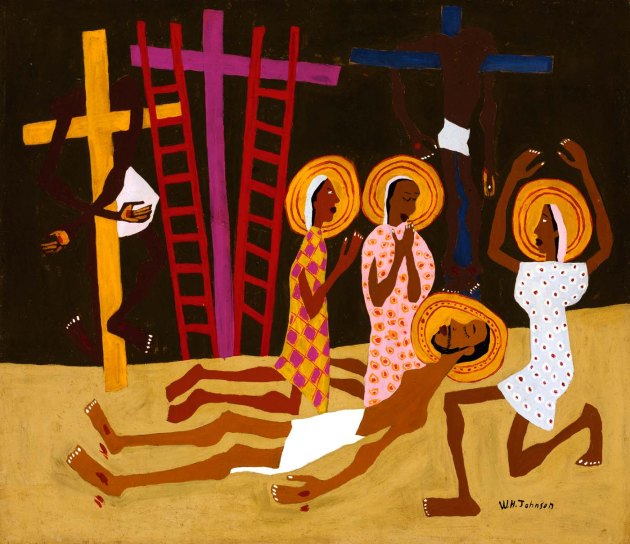 CODA: “Rosing from the Dead”

In place of commentary for Gold Morning with Roses by Pat Steir, 1999, a poem:

“Rosing from the Dead” by Paul J. Willis

We are on our way home
from Good Friday service.
It is dark. It is silent.
“Sunday,” says Hanna,
“Jesus will be rosing
from the dead.”

It must have been like that.
A white blossom, or maybe
a red one, pulsing
from the floor of the tomb, reaching
round the Easter stone
and levering it aside
with pliant thorns.

The soldiers overcome
with the fragrance,
and Mary at sunrise
mistaking the dawn-dewed
Rose of Sharon
for the untameable Gardener.

This concludes the Stations of the Cross tour at the Smithsonian American Art Museum, organized, written, narrated, and produced by Victoria Emily Jones. For weekly art, music, and poetry presented from a Christian faith perspective, visit ArtandTheology.org, and follow Victoria on Twitter @artandtheology.

FEEDBACK: If you participated in this tour, I would love to hear your feedback, either in the comment box below or via e-mail (victoria.emily.jones@gmail.com). What was the experience like for you? What work made the biggest impression? In the commentary, did you feel there was an appropriate balance of artist biography, image analysis, and devotional reflection, or would you have liked it to be heavier/lighter in one area? Did you appreciate the music overlays, or were they distracting? Was the SoundCloud audio distribution platform convenient and practicable? Short of hiring professionals to read and studio-record the commentary, design the album cover and promotional materials, and develop a custom app, is there anything you would have changed about the tour? (Note: I did reach out to the museum and unfortunately, because I’m not an established partner, they are not able to help me promote the tour.)

Again, I really appreciate your input, as it will guide me in developing similar products in the future. Thank you!

27 thoughts on “Stations of the Cross at the SAAM”