Once there was this man who had two sons. One day the younger son came to his father and said, “Father, eventually I’m going to inherit my share of your estate. Rather than waiting until you die, I want you to give me my share now.” And so the father liquidated assets and divided them. A few days passed and this younger son gathered all his wealth and set off on a journey to a distant land. Once there he wasted everything he owned on wild living. He was broke, a terrible famine struck that land, and he felt desperately hungry and in need. He got a job with one of the locals, who sent him into the fields to feed the pigs. The young man felt so miserably hungry that he wished he could eat the slop the pigs were eating. Nobody gave him anything.

So he had this moment of self-reflection: “What am I doing here? Back home, my father’s hired servants have plenty of food. Why am I here starving to death?I’ll get up and return to my father, and I’ll say, ‘Father, I have done wrong—wrong against God and against you.I have forfeited any right to be treated like your son, but I’m wondering if you’d treat me as one of your hired servants?’”So he got up and returned to his father. The father looked off in the distance and saw the young man returning. He felt compassion for his son and ran out to him, enfolded him in an embrace, and kissed him.

The son said, “Father, I have done a terrible wrong in God’s sight and in your sight too. I have forfeited any right to be treated as your son.”

But the father turned to his servants and said, “Quick! Bring the best robe we have and put it on him. Put a ring on his finger and shoes on his feet.Go get the fattest calf and butcher it. Let’s have a feast and celebrate because my son was dead and is alive again. He was lost and has been found.” So they had this huge party.

Now the man’s older son was still out in the fields working. He came home at the end of the day and heard music and dancing. He called one of the servants and asked what was going on. The servant said, “Your brother has returned, and your father has butchered the fattest calf to celebrate his safe return.”

The older brother got really angry and refused to come inside, so his father came out and pleaded with him to join the celebration. But he argued back, “Listen, all these years I’ve worked hard for you. I’ve never disobeyed one of your orders. But how many times have you even given me a little goat to roast for a party with my friends? Not once! This is not fair! So this son of yours comes, this wasteful delinquent who has spent your hard-earned wealth on loose women, and what do you do? You butcher the fattest calf from our herd!”

The father replied, “My son, you are always with me, and all I have is yours. Isn’t it right to join in the celebration and be happy? This is your brother we’re talking about. He was dead and is alive again; he was lost and is found again!”

Robert Timothy Wilkins (1896–1987) was a gospel blues guitarist and vocalist and a minister of the Church of God in Christ. Part African American, part Cherokee, he was born in Mississippi but spent his entire adult life in Memphis, where he became fairly well known for his music. In 1929 he wrote and recorded the predecessor to “Prodigal Son”: same melody and guitar lines, but with lyrics that bemoan cheating women, and he called it “That’s No Way to Get Along.” After he “got religion” (that is, converted to Christianity) in 1936, he gave up singing secular songs. He’d still play them on his guitar for private audiences—it was only the words he deemed sinful—and he even reworked several by replacing his original lyrics with religious ones, as was the case with “That’s No Way to Get Along,” which he retitled “Prodigal Son” and transformed into a retelling of the biblical parable. [Read the lyrics]

We probably would have never heard these gospel songs from Wilkins’s later years if it weren’t for American folk musicologist Dick Spottswood, who in the 1960s combed the South looking for blues singers whose decades-old 78s he had encountered, seeking to record new performances. Wilkins was in his seventies, but he agreed to perform for a recording (and subsequently, for the Newport Folk Festival in Rhode Island), insisting that he would do only gospel. The resultant album, released in 1964 by Piedmont Records, was Reverend Robert Wilkins—Memphis Gospel Singer, on which “Prodigal Son” first appears. The song was remastered, restored, and re-released in 2014 on a compilation album of Wilkins material, Prodigal Son, which adds four uncollected gospel songs to the original album’s track list.

The song [“Prodigal Son”] did not appear in Wilkins’ church services, as it was deemed not exciting enough for his congregants. Instead, the piece was reserved as a late-night solo, played for small audiences in the comfort of his living room. The quiet picking, repetitious bass note run and Wilkins contemplative drawl make for a hypnotic mix and the quickest 10-minute song I’ve ever encountered. The open tuning allows for a richer low end and frees Wilkins’ left hand to speak easily with his slide.

Wilkins recorded “Prodigal Son” in 1964, but it wasn’t until 1968, when the Rolling Stones covered it on Beggars Banquet, that it gained a wide audience. They condensed the ten-minute song to just under three minutes, and I think they do quite a fine job with it. Royalties generated by sales of Beggars Banquet created a solid supplemental income for Wilkins until his death in 1987.

The Rolling Stones are heavily influenced by blues music (their name comes from a Muddy Waters song) and have done much to keep it alive and expand its popularity. Keith Richards says, “If you don’t know the blues . . . there’s no point in picking up the guitar and playing rock and roll or any other form of popular music.”

The parable of the prodigal son—or, perhaps more accurately, the parable of the two sons—is a familiar one, and artist James B. Janknegt (previously) interprets it visually for the present day, localizing it to his native Texas.

After insulting his father and taking his money, the younger son flies off to pursue fleeting pleasures—strip clubs and all that. But those pleasures don’t satisfy. He ends up working at McDonald’s and, having squandered his wealth, is reduced to eating his meals from a dumpster. He feels cheap, trashy, and spiritually dry, as indicated by the cactus in the adjacent panel. 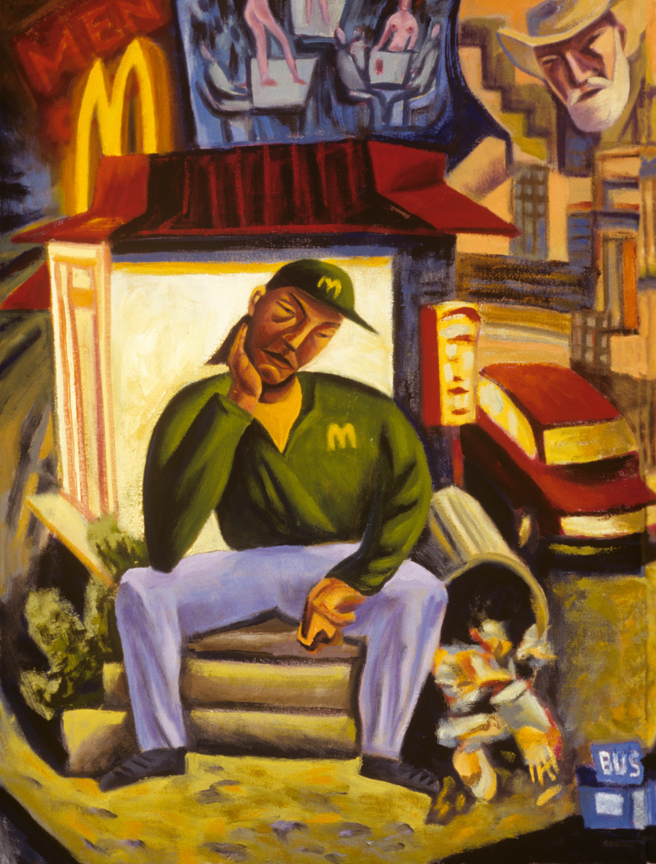 Hungry for more, he decides to return home, so he hops on a bus, and when the bus can take him no farther, he hitchhikes, catching one, two, three rides, then walks the rest of the way until his shoes wear out. Finally he reaches the front-yard footpath of his father’s house, the dry ground he treads giving way to green grass that becomes increasingly lush the nearer he gets. Anticipating his return, the father comes running out to welcome him home with full forgiveness.

But his big brother isn’t nearly as happy at this turn of events. Quite the contrary, he’s confused, upset: Why would Dad not punish little brother for his flagrant disrespect and waywardness? Why is he being thrown a party? In a fit of anger, he breaks the neck of his guitar across his thigh. Instead of joining the musical celebration, he stews in his own bitterness. His heart is as dead as the cattle skull at his feet. 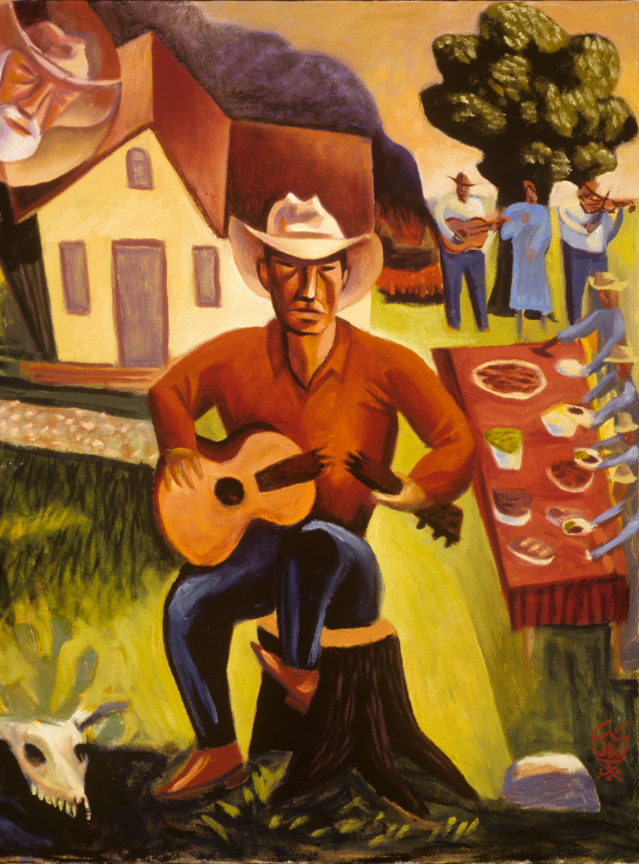 Still, the father looks on him lovingly, just as he does his other son, waiting patiently for him to experience a similar metanoia—a turning toward the light, a coming to the party.

Two Sons is one of forty of James B. Janknegt’s modernized parable paintings that appear in the book Lenten Meditations, which you can purchase from Jim’s website.

To view all the Revised Common Lectionary scripture readings for the Fourth Sunday in Lent, cycle C, click here.

One thought on “Down the Road (Artful Devotion)”