Then the eyes of the blind shall be opened,
and the ears of the deaf unstopped;
then shall the lame man leap like a deer,
and the tongue of the mute sing for joy.

And the ransomed of the Lord shall return
and come to Zion with singing;
everlasting joy shall be upon their heads;
they shall obtain gladness and joy,
and sorrow and sighing shall flee away.

Snow Hill by Andrew Wyeth [previously] is “a conscious summary of his artistic life that is both somber memoir and playful recalibration” (John Wilmerding). It shows six of his friends and neighbors, who modeled for him many times throughout his career, dancing around a beribboned Maypole in winter in Chadds Ford, Pennsylvania. Their coats, earflaps, and braids fly in the wind, as does one untouched white ribbon, which, it has been posited, could represent Christina Olson (who had a degenerative muscle disorder and could not walk), the artist’s wife Betsy, or the artist himself.

This painting, one of Wyeth’s last, was the finale of a major retrospective at the Brandywine River Museum of Art in 2017, which has been one of the most memorable art exhibitions I’ve ever attended. The wall text there read,

Painted over a two-year period, Snow Hill is both fantasy and memorial, a visual summation of the iconic places and people of Chadds Ford that occupied [Wyeth] for the previous fifty years. Wyeth looks backward and inward, bringing together many of these subjects from his past, a number of them now deceased. Depicted are Karl Kuerner (dressed in his German uniform), holding the hand of Anna Kuerner, who is in turn linked to William Loper, whose prosthetic hook is held by Helga Testorf, rounding the circle to Allan Lynch (of Winter 1946) and Adam Johnson (partially obscured). They are surrounded by a landscape that shows, left to right: the railroad tracks where Wyeth’s father, N. C. Wyeth, was killed in 1945; the Kuerner farmhouse and barn; the remains of Mother Archie’s octagonal church; the Ring family home in the distance; and Adam Johnson’s shed and haystack.

Wyeth’s models are shown holding ribbons—although one white ribbon is symbolically floating free—and dancing atop Kuerner Hill—a site at once iconic for its recurrence in Wyeth’s work and for its proximity to the site of his father’s death. . . .

I love how the dead and the living join together in this Yuletide circle dance, in which suffering is taken up into joy. Wyeth had lived through Karl Kuerner, a World War I veteran, succumbing to cancer, Allan Lynch to suicide, and Bill Loper to mental illness, as well as the early death of his father and nephew in a car accident. And while such darkness is not fully dissipated in this gray-day scene, a mood of celebration and hope and friendship does take over. 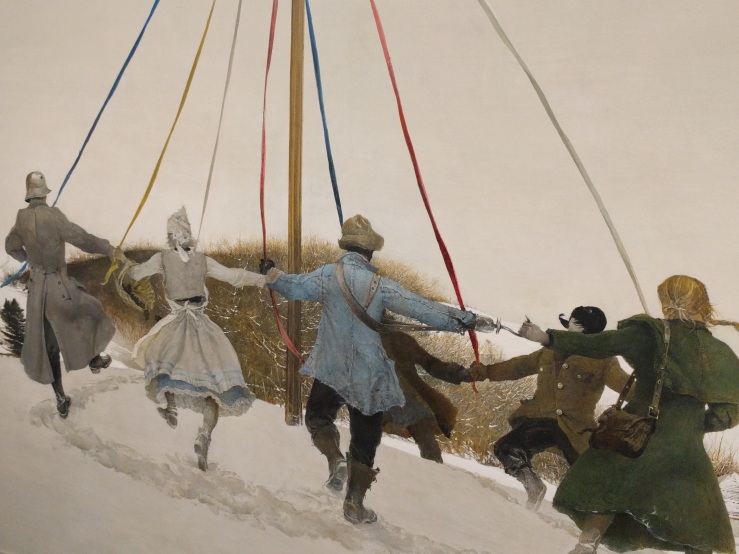 To view all the Revised Common Lectionary scripture readings for the Third Sunday of Advent, cycle A, click here.

6 thoughts on “Everlasting Joy Shall Be (Artful Devotion)”