“Painting is about the world we live in. Black people live in the world. My choice is to include them. This is my way of saying yes to us.”—Kehinde Wiley

Last weekend I visited the Virginia Museum of Fine Arts, where the exhibition “Kehinde Wiley: A New Republic” is showing through September 5, a fifteen-year survey of Wiley’s art organized by the Brooklyn Museum. An academically trained artist, Wiley paints black and brown bodies in proud poses against ornate decorative backgrounds on monumental canvases, riffing on art-historical masterpieces from the Renaissance and Baroque eras. He “street casts” his models: walks the streets of inner-city neighborhoods, inviting black males, ages eighteen to thirty-five, to sit for portraits. In this collaborative process, the model chooses a reproduction of a painting from a book and reenacts, in his streetwear, the pose of the painting’s figure.

In the exhibition catalog, Connie H. Choi, a research associate at the Brooklyn Museum, writes,

In inserting the urban black male figure into the art-historical canon, the artist brings the canon up to date and at the same time questions its centuries-long exclusion of such figures. His manner of portraying African American men is Wiley’s way of affirming their presence in a society that has long discounted or undervalued them. (24)

Cultural critic Touré describes Wiley’s oeuvre as an “attempt to rehabilitate black images”—in the media (especially before the presidency of Barack Obama), often simplistically skewed toward hip-hop music videos and newsreels of urban gang violence—“by putting them in the context of nobility, of import, of beauty” (52).

Kings, nobles, and wealthy merchants are among the subjects depicted in Wiley’s source material. But biblical and extrabiblical saints, and Christ himself, are also present. For centuries religious imagery had a commanding presence in churches, palaces, homes, and government buildings, exercising sway over the imagination and steering popular devotion. By translating European devotional paintings—fashioned in the image of the white ruling class—into a contemporary idiom that places black bodies up front and center, Wiley rectifies the lack of representation of racial minorities in and as the body of Christ.

His Down series, which seeks to capture the majesty and severity of fallen warriors and entombed saints, features three paintings of the dead Christ. Hans Holbein’s life-size predella panel on the subject was the starting point; showing Jesus’s putrefying corpse, it is regarded as one of the all-time most grotesque paintings of Jesus. In The Idiot, Dostoyevsky’s Prince Mishkin says that viewed in isolation from the Resurrection, the painting has the power to make one lose one’s Christian faith. 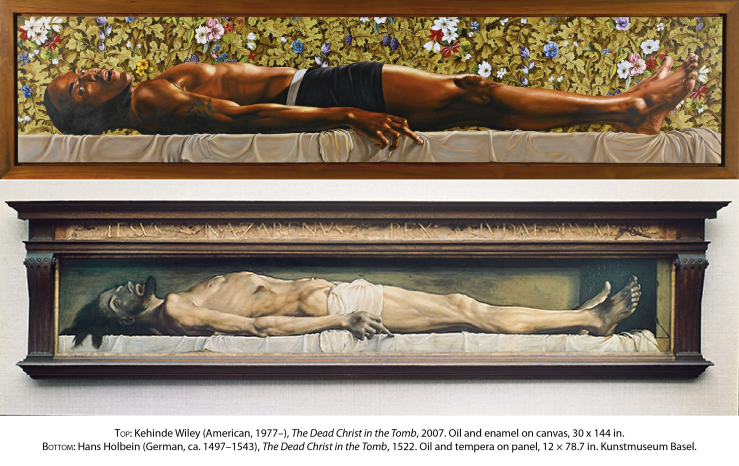 In Wiley’s reconceptualization, Jesus’s body is fit, his skin radiant. Gone are the blue face, puncture wounds, and emaciation of the prototype. Art critics have recognized in this and many more of Wiley’s paintings a homoeroticism, reading them in light of Wiley’s sexuality. That’s their prerogative, but in the direct gaze and parted lips of Wiley’s dead Christ I hear not “Come hither” but “Look, white America, at what you have done, at what you are doing.”

The Down series predates the Black Lives Matter movement but speaks powerfully into that context. It challenges the public—especially the white public—to see the rampant shooting deaths of unarmed black men by police and to name it what it is: an injustice, a tragedy.

For all their visual engagement with and meditation on the Passion, Christians at large have proven deficient in their willingness to mourn the suffering and death of black brothers and sisters. Maybe, just maybe, gazing on a dead black Christ could produce more empathy in us when we see news photos of black people whose lives have been taken from them. Maybe these paintings can lead us into lament. In Wiley’s Lamentation, for example, we’re invited to poke our heads into the void left by the excision of Mary and John and to wail and moan. (For more on racial tensions in America from a Christian perspective, I commend to you the lecture “The Heart Cry of #BlackLivesMatter” by Jemar Tisby, cofounder of the Reformed African American Network.)

In these three paintings Wiley continues the legacy of those Harlem Renaissance artists—poets, illustrators, musicians—who linked the nation’s destruction of black bodies through lynching to the Crucifixion of Christ.   END_OF_DOCUMENT_TOKEN_TO_BE_REPLACED