I love movies. My husband shares this love, and it’s one of our primary forms of bonding. I’m thankful that he bucks the stereotype of men who like only shoot-’em-up action flicks or buddy comedies. We do have a few of those in our collection . . . but Eric is game for any genre. He can enjoy a silent horror film, a children’s adventure, a foreign-language drama, a Golden Age Hollywood musical, an art-house sci-fi, or the latest Jane Austen adaptation just as much as any male-marketed blockbuster. And thankfully he has none of the criteria I often get from friends who join us for movie nights: no black-and-white, no subtitles, nothing sad, nothing scary, nothing “slow,” and nothing that makes me have to think too hard. (!)

Many Christians I know forgo TV and movie watching altogether, and demand the same abstinence from their kids, so as to not “waste time” with “mindless entertainment” or foster a screen addiction. A more extreme, but no less common, motive I’ve encountered is to avoid subjecting oneself to immoral filth and supporting Hollywood’s “liberal agenda.” While I agree that indoor-outdoor balance and a variety of play is important, especially for developing young brains, and that you should never violate your conscience (e.g., if it forbids you from seeing or hearing certain things), I want to push against the notion that movies are of limited to no value unless they educate or support a Christian worldview.

Fortunately, film critic Josh Larsen, editor of Think Christian and cohost of Filmspotting, offers a redeeming perspective on film in his new book Movies Are Prayers: How Films Voice Our Deepest Longings (InterVarsity Press, 2017). Many movies are expressions of the burdens and desires of the soul, he says, that can take the shape of praise/wonder, petition, confession, lament—in a word, prayer. Prayers are “instinctive recognitions of good (of things worthy of praise) and evil (of things inexplicably bent and broken)” (6), and they need not be restricted to liturgical formats.

This human instinct to reach out in praise or lament or supplication or confession to the divine does not take place only in church, guided by liturgy and pastors. It isn’t limited to early morning devotions, in that serene space before silence gives way to the day. It isn’t strictly the domain of dinner tables, where families gather to recite familiar words (“God is great, God is good . . .”). and it isn’t an instinct shared only by Christians. Prayer can be expressed by anyone and can take place everywhere. Even in movie theaters. (7) 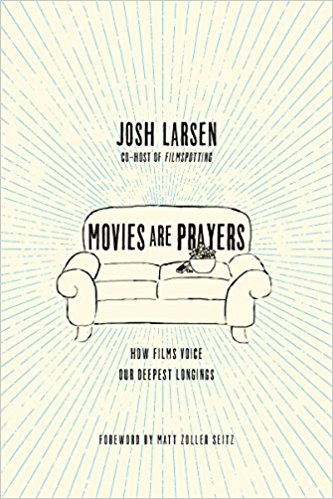 Through picture and sound, filmmakers offer up prayers and invite us not only to listen in, but to pray along—to respond in kind, with whatever words or medium or action we feel prompted to use. Therefore, rather than regarding movies as time spent apart from God or a distraction from more important things, we would do well, Larsen suggests, to let them enrich our awareness of the world’s beauty and suffering and, consequently, guide us into prayer.

Larsen covers diverse genres and styles spanning from the silent era through today, including a mix of popular classics and lesser known gems. Below are just three I’ve added to my watch list since reading Movies Are Prayers.

Freaks (1932) is a revenge drama set against a circus backdrop, starring professional sideshow performers. At a time when people paid money to see and gawk at those with biological anomalies, director Tod Browning intended to show their humanity, that they have the same emotional needs as everyone else. He never filmed his actors’ “acts” (so as not to exploit them) but instead depicts them backstage, living their everyday lives. Although the film features an able-bodied romantic pairing of trapeze artist and strongman, Browning isn’t that interested in it; it is the interior life of Hans, a little person who’s used by Cleopatra for his money, that constitutes the main focus.   END_OF_DOCUMENT_TOKEN_TO_BE_REPLACED