NEW PHOTOGRAPH SERIES: “The Four Freedoms” by Hank Willis Thomas and Emily Shur: In his 1941 State of the Union address, President Franklin D. Roosevelt insisted that people in all nations share Americans’ entitlement to four basic freedoms: freedom of speech, freedom of worship, freedom from want, and freedom from fear. This famous speech became the basis for Norman Rockwell’s set of four illustrations, originally published in the Saturday Evening Post in 1943, that have become some of history’s most iconic representations of the American idea.

Artist Hank Willis Thomas and photographer Emily Shur decided to reimagine these scenes with a cast that’s more representative of American diversity. One of the eighty-two final images they created is published on the cover of the current issue of Time magazine. It and others will form the backbone of a national billboard campaign by the nonpartisan organization For Freedoms to encourage civic engagement. “We believe that if artists’ voices replace advertising across the country, public discourse will become more nuanced,” their website says.

IN CONCERT: Eric and I went to see brother-sister folk duo The Oh Hellos (Tyler Heath and Maggie Heath Chance) in Baltimore earlier this month and had a great time. My favorite song from their set list was “Soldier, Poet, King,” which describes Jesus’s coming in all three roles—perfectly appropriate for the upcoming Advent season! Jesus, the Word of God, comes to tear down Satan’s kingdom and establish his just rule in our lives and world (1 John 3:8b; Rev. 19:11–16). The final verse affirms Jesus’s status as Messiah, the waited-for “Anointed One,” and celebrates his power marked by humility, even unto death. The blood he wears into battle is his own.

The Oh Hellos’ nationwide tour continues through the end of the year, so visit their website to see if they’ll be stopping near you.

NEW ALBUM: Crumbs by Liturgical Folk: Liturgical Folk (previously here and here) released its third album this month, which “build[s] on the themes of eucharist and the mission of the church to bring peace and reconciliation to the world.” The title comes from the track “Prayer of Humble Access,” a verbatim setting from the “Holy Eucharist Rite I” in the Book of Common Prayer that alludes to the story of the Syrophoenician woman.


Most of the song texts on the album come from that traditional Anglican prayer-book and were set to music by Ryan Flanigan, though a few texts are contemporary. “Lord, Lord, Lord,” for example, was written in the wake of the August 9, 2014, shooting of Michael Brown in Ferguson, Missouri, and amid the subsequent escalation of racial tensions in the country. “As a privileged, white, middle class, American man,” Flanigan wrote,

I felt for the first time in my life the systemic injustice against black males in our country. What I found most troubling, besides death itself, was the response of some white, privileged people to the shooting, particularly the response of some Christians on social media and the News. When we should have been mourning with those who mourn, confessing our fears and sins, and seeking reconciliation, many of us turned a blind eye or, worse, assumed a posture of defensiveness and denial. I wrote this song as a corporate confession of sin to God and our fellow men, a plea for God to forgive us and restore our broken trust with him and with those we’ve failed to love.

WORLD’S FIRST SNOWFLAKE PHOTOS: “The Man Who Revealed the Hidden Structure of Falling Snowflakes”: Maryland saw its first snow of the season this week, as did most of the East Coast, which means Twitter saw a flurry of snowflake images! The Smithsonian posted about Wilson “Snowflake” Bentley (1865–1931), whose perfection of innovative photomicrographic equipment and techniques (which included chilled velvet and a turkey feather) enabled him to photograph thousands of individual snowflakes without their melting, providing valuable scientific records of snow crystals and their many types.

The first person to photograph a single snowflake, . . . Wilson A. Bentley used a microscope with his bellows camera—plus years of trial and error—to get a photo of one flake in 1885. But he didn’t stop there. Bentley went on to take thousands more, . . . which helped support the belief that no two snowflakes are alike. In 1903, he sent 500 prints of his snowflakes to the Smithsonian, hoping they might be of interest to our Secretary. The images are now part of the Smithsonian Archives. 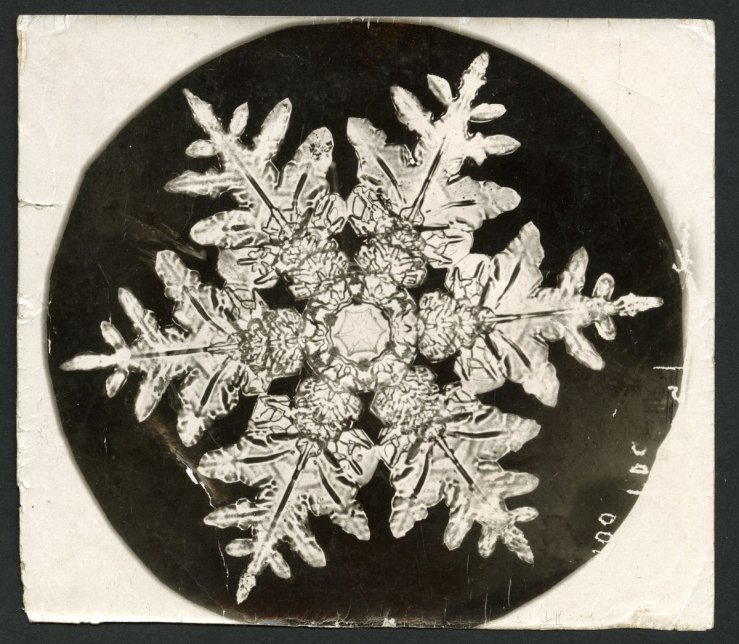 BALKAN ICON: “Transforming a Parable: The Good Samaritan”: Run by David Coomler, a museum researcher, Icons and Their Interpretations discusses aspects of traditional Russian, Greek, and Balkan iconography, inviting people to submit photos of icons for identification of subject or meaning, and translation of inscriptions. Recently he wrote about a fourteenth-century Serbian Orthodox fresco that, like many of the church fathers, promotes an allegorical reading of the parable of the good Samaritan. In this interpretation, the man en route to Jerusalem is Adam, or Everyman, who is beaten by demons; the priest and the Levite represent the law of Moses and the priesthood of Aaron, which cannot help the wounded man. But the “good Samaritan,” Jesus, stoops down to save, carrying the man not on a beast of burden but on his own back, to an “inn,” the church. He hands two “coins,” the Bible and tradition, to the innkeeper, and promises to return. See further image details and commentary at the web link above.

OBITUARY: Christian composer Kurt Kaiser dies at 83: On November 12, Kaiser passed away at his home in Waco, Texas, after a six-decade-long career in composing, playing, arranging, and producing Christian music. A Gospel Music Hall of Famer and a progenitor of CCM, he’s best known for his song “Pass It On,” but I know him for “Oh How He Loves You and Me,” two renditions of which are posted below; the first is a solo performance by Vanessa Williams with gospel piano accompaniment by Richard Smallwood, and the second is performed a capella in four-part harmony by Kaoma Chende with the use of overdubbing.

Behold, how good and pleasant it is
when brothers dwell in unity!

It is like the dew of Hermon,
which falls on the mountains of Zion!
For there the Lord has commanded the blessing,
life forevermore.

SONG: “Together (Psalm 133)” by James Zeller | Performed by David Potter, on The Good Life by the Psalter Project (2017)

For more info on Walker’s mural, see my review of Painting the Gospel.

This weekend we witnessed how bad and destructive it is when brothers dwell in disunity. For congregations seeking resources for responding prayerfully to the racist attack carried out in Charlottesville, Virginia, Rich Villodas has written a litany:

Leader: Lord Jesus, your Kingdom is good news for a world caught in racial hostility. We ask that you would give us grace for the deep challenges facing our country.

Leader: Lord, we confess our anger, our deep sadness, and our collective sense of weakness to see this world healed through our own strength.

Leader: Lord, we honestly confess that our country has a long history of racial oppression, that racism has been a strategy of evil powers and principalities.

Leader: Lord, we confess that the gospel is your power to form a new people not identified by dominance and superiority, but by unity in the Spirit.

Leader: Lord, we ask that you would help us name our part in this country’s story of racial oppression and hostility. Whether we have sinned against others by seeing them as inferior, or whether we have been silent in the face of evil. Forgive us of our sin.

Leader: Lord, we pray for our enemies. For those who have allowed Satanic powers to work through them. Grant them deliverance through your mighty power.

Leader: Lord, we ask that you would form us to be us peacemakers. May we be people who speak the truth in love as we work for a reconciled world.

To view all the Revised Common Lectionary scripture readings for Proper 15, cycle A, click here.