The global push to make art more accessible to the public has led to some impressive digital creations in the past year. The following are ones I’ve really enjoyed exploring, some released as recently as this month. They all focus on a particular artwork or era or (in the case of the Jewish art database) faith tradition. I will cover the more all-encompassing digital art initiatives/databases and commendable museum websites in a future series of posts, where I will give them more individualized attention. Some of the creations below represent single projects within those broader initiatives.

“The Audacity of Christian Art”: Written and presented by Dr. Chloë Reddaway, this series of seven short films looks at paintings from the (London) National Gallery’s Renaissance collection and explores some ingenious artistic responses to the challenge of painting Christ.

As curator of art and religion at the museum, Reddaway’s role is to understand more about the paintings’ religious content and context. (Her main academic background is theology.) She also lectures for the MA in Christianity and the Arts at King’s College London. I love how she defines her primary research interest: “visual theology, especially the recovery of historic works of art as a resource for contemporary theology.”

The trailer for “The Audacity of Christian Art” is below, followed by links to all seven episodes. All are shot in ultra-high resolution and feature stunning details.

Episode 1: “The Problem with Christ”
Episode 2: “Christ Is Not Like a Snail: Signs and Symbols”
Episode 3: “Putting God in His Place: Here, Everywhere, and Nowhere”
Episode 4: “Time and Eternity: Yesterday, Today, and Always”
Episode 5: “This World and the Next: Christ on Earth, Christ in Heaven”
Episode 6: “So Near and Yet So Far: Visions and Thresholds”
Episode 7: “Unspeakable Images: When Words Fail”

The Census at Bethlehem by Pieter Bruegel: “Online exhibitions” are something I’ve seen more and more of recently—that is, the presentation of artworks in a digital rather than physical space, using tools unique to that medium to enhance the viewing experience. Last year Google Arts and Culture launched one in conjunction with the Royal Museums of Fine Arts of Belgium, centered around Pieter Bruegel’s The Census at Bethlehem (1566), which sets Mary and Joseph’s census registration within the hustle and bustle of a Brabant village. The interface guides you through a sequence of bite-size commentaries, sometimes presented as text alongside an image detail, sometimes as a short video. What makes it an “exhibition” is that other works are shown alongside it to locate it within a larger tradition of Netherlandish painting. One frame, for example, shows how Bruegel furthered the innovative “alla prima” technique introduced by Hieronymus Bosch.

I studied this painting in college (through slides and textbook reproductions) but have never seen it in this much detail and am now all the more in awe of it. Bruegel’s paintings, which almost always depict a flurry of activity, lend themselves particularly well to this viewing format: it’s helpful to be guided through the various vignettes, each one a window into sixteenth-century Dutch life. Up close, you can see kids blowing up pig-bladder balloons and running across the ice pushing cow jaws they got from the butcher; you can see adults patronizing a tavern in the hollow of a tree, called “In De Swaen”; and much more. 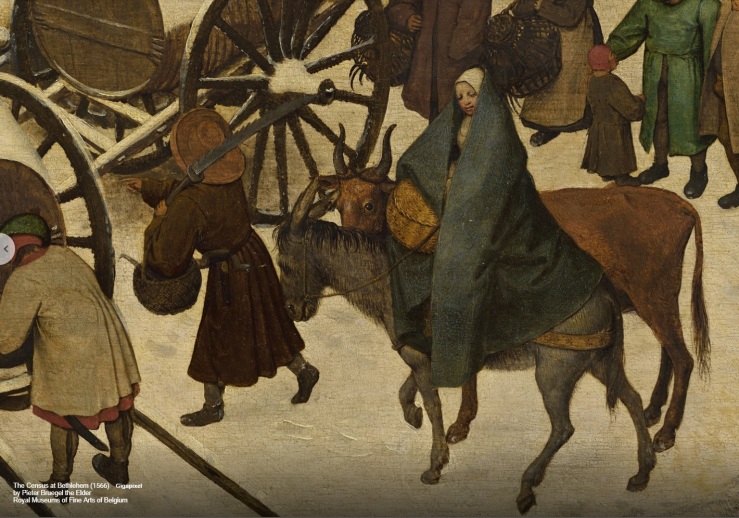