SONG: “No Hard Feelings” by the Avett Brothers, on True Sadness (2016)

I could listen to Seth Avett [previously] sing all day—and sometimes I do. (Lately I’ve been gorging on his cover of the Tom Waits song “Fish and Bird”!) His light, plaintive, silvery voice moves my soul in a way that producer Rick Rubin embodies in the 2018 HBO documentary May It Last: A Portrait of the Avett Brothers, as in the clip below. (He’s the long-bearded guy swaying around with his eyes closed.) “No Hard Feelings” is the crux of the film, and it made me cry when I first watched it. It’s an aspiration to live without bitterness, without malice, without enemies—an aspiration arrived at by contemplating one’s eventual death.

When my body won’t hold me anymore
And it finally lets me free
Will I be ready?
When my feet won’t walk another mile
And my lips give their last kiss goodbye
Will my hands be steady?

When my body won’t hold me anymore
And it finally lets me free
Where will I go?
Will the trade winds take me south
Through Georgia grain or tropical rain
Or snow from the heavens?

Directed by Judd Apatow and Michael Bonfiglio and filmed over the course of two years, May It Last charts the rise of the North Carolina folk rock band the Avett Brothers (Scott Avett [previously], Seth Avett, Bob Crawford, Joe Kwon) and follows them in the present during the creation of their multi-Grammy-nominated album True Sadness. The nucleus of the film is the brotherhood of Scott and Seth—their growing up in the South, their creative collaborations, and their constant love, respect, and support for one another. Marriage, divorce, parenthood, and illness are also highlighted, as these inform the songs on True Sadness, of which Seth says, “There are moments of undeniable celebration and camaraderie, others of quiet and lonely exhalation.” (This could really describe the Avett Brothers’ whole catalog.)

The documentary is wonderful; you should see it. It’s streaming for free on HBO or can be rented from YouTube, Amazon Prime, or Vudu.

When God gave us this commandment, do you think the idea was that we would form a community in which we constantly antagonize each other, hate each other, abuse each other, wound each other—and then, at the last moment, refrain from murdering each other? Of course not. The spirit of “You shall not murder” is that your bearing toward your neighbors—both in your actions and in your dispositions, your hand and your heart—should never be enmity. Think of it this way: when you’re angry at your brother or sister, when you lash out with hateful words, isn’t that, too, in its own way a kind of violence, a lesser form of “murder”? Isn’t that, too, in its own way a violation of the commandment, an act of ruin against the healthy community the commandment is meant to help you create?

To view all the Revised Common Lectionary scripture readings for the Sixth Sunday after Epiphany, cycle A, click here.

JOHN PIPER ON IMAGINATION: “Obey God with Your Creativity: The Christian Duty of Imagination”: Within evangelicalism (the tradition I belong to), the imagination is often deemed more of a liability than a virtue, something to be distrusted, at the very least, and at most, to be rejected as evil. So I was thrilled earlier this month to hear John Piper, one of America’s leading evangelicals, speak out in strong affirmation of imagination, which he calls “one of the great duties of the Christian mind.” It can be used destructively, he cautions, but it’s a God-given capacity that God wants us to exercise and strengthen, like a muscle, so that we can see more clearly what is and what could or what will be.

“The imagination,” Piper writes, “calls up new words, new images, new analogies, new metaphors, new illustrations, new connections to say old, glorious truth—whether from the world or from the word of God. Imagination is the faculty of the mind that God has given us to make the communication of his beauty beautiful.” To communicate breathtaking truth in a boring way is “probably a sin,” he says, for God is “infinitely worthy of ever-new verbal, musical, and visual expressions.” 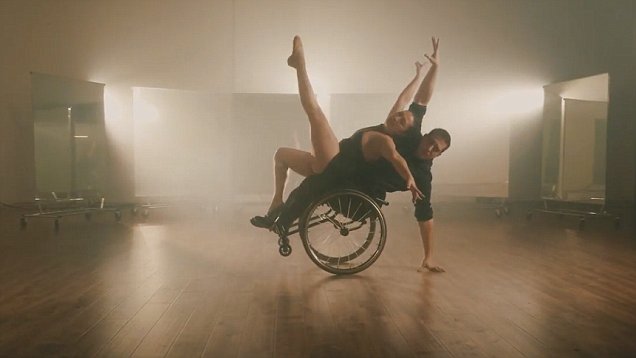 INCLUSIVE DANCE: Founded by Marisa Hamamoto in 2015, Infinite Flow is a professional dance company and nonprofit whose mission is “to use dance as a vehicle to create an inclusive world and eliminate the stigma and inequality associated with disability,” especially wheelchair use. Artistic excellence, social innovation, empowerment, community, and integration are among its values, which are played out through dance classes, workshops, and outreach events that incorporate people with and without disabilities. You can view snippets from classes and rehearsals as well as polished, artfully filmed choreographed routines on their Facebook page—like this most recent one, in which Hamamoto dances with Piotr Iwanicki, a multiple wheelchair World Latin Champion.

After twenty years of training in ballet and contemporary dance, Hamamoto suffered a spinal cord infarction, which left her temporarily paralyzed from the neck down. Upon recovery, she developed an interest in and pursued ballroom dancing, which led her to imagine what an inclusive form of the genre might look like. To learn more about Infinite Flow, see these two promo videos, and follow them on Facebook. You’ll also want to check out “Gravity.”

PODCAST: Speaking with Joy: Lately I’ve been devouring this podcast by Joy Clarkson, a doctoral candidate at the Institute for Theology, Imagination, and the Arts at St. Andrew’s University in Scotland (she’s studying the role of the affections and the arts in moral formation). Though it was launched last November, I first discovered it in July at the tail-end of her summer book series on The Great Divorce, an allegorical tale by C. S. Lewis, in which she discusses themes such as desire, grace, the real, incurvatus in se (St. Augustine), self-choice, being seen and known, and need-love versus gift-love. I was hooked! Now I’m a Patreon supporter.

Speaking with Joy is such a bright corner of the Internet, full of hope, wisdom, and delight. The standard episode format is an exploration of a given theme through three pieces of art: one literary, one visual, and one musical. I really enjoyed the last three I listened to: “The Army of Emotions,” featuring St. Macrina, Mister Rogers’s ditty “What Do You Do with the Mad That You Feel?,” and the Irish animated film The Song of the Sea; “The Wisdom of Whimsy,” featuring Manalive by G. K. Chesterton, the illustrations of Beatrix Potter and Breezy Brookshire, and “On the Radio” by singer-songwriter Regina Spektor; and “Decent Men in Indecent Times,” which explores why and how we tell stories of the two world wars by looking at the contrasting poetry of Wilfred Owen and Laurence Binyon, the movie Dunkirk, and John Williams’s score for Schindler’s List.

NEW IMAGE STAFF: Last week Image journal announced that James K. A. Smith, a professor of philosophy at Calvin College, will be taking the helm of Image as the journal’s new editor in chief. What a perfect choice! I’ve been hearing a lot of Smith since the publication of his book You Are What You Love: The Spiritual Power of Habit in 2016 and have appreciated his recognition of the important role of artists. “If you want to change how the world thinks, you first have to change how they imagine,” he once said. “That’s why, today, artists are our apologists.” More recently, in a letter to the Image search committee, he wrote,

The arts speak to aspects of human nature ignored or denied by a culture captivated by brutal notions of “efficiency” or quasi-scientific narratives that reduce us to animality. It’s in literature, poetry, film, and so many other art forms that we hear echoes of a biblical understanding of humanity—that we are created in God’s image, animated by hungers and hopes, made to delight and play. In other words, the arts are evidence of what I’ve called “cracks in the secular”—the recalcitrant mystery at the heart of the human that refuses to be eviscerated. Art continues to shout Nein! to our disenchantment.

I’m looking forward to this next chapter of Image.

ART HEIST: “Police back on the trail of ‘world’s most wanted’ stolen Caravaggio painting”: On October 15, nearly fifty years after Caravaggio’s Nativity with San Lorenzo and San Francesco was stolen from the Oratory of San Lorenzo in Palermo, Sicily, experts met at the Vatican to discuss reinstating an active search. Speculation of mafia collusion and espionage have circulated around the case, which ranks second on the FBI’s list of top ten unsolved art crimes.

NEW ALBUM: Yesterday Moda Spira (the stage name of Latifah Alattas) released Divorce, an intimate musical chronicle of the unexpected end of her marriage and the journey of grief she’s been on since. “I hope it helps those of you that might feel alienated or lost in the throes of divorce or disconnection from someone you love,” she says. In response to a request, Alattas released a series of podcast episodes that discuss each song on the album in depth; listen here. I first learned about the project back in July when Stephen Roach interviewed Alattas on the Makers & Mystics podcast—such a rich and memorable conversation that deepened my empathy for the loved ones of mine who have had to endure the pain of divorce.

Below is a video promo Alattas made for the album’s Kickstarter campaign. Click here to view the variety of streaming and purchase options.