ART TALK: “Saying Yes: The Annunciation in Contemporary Art” by Victoria Emily Jones: Speaking of the Annunciation . . . my March 18 presentation from the Breath and the Clay creative arts gathering is now online! (The aforementioned Rehnman piece is one of six I discuss.) With permission from the conference organizers, I have uploaded it to my YouTube channel for public viewing.

It’s an act of vulnerability for me to share it with you, as I’m aware of the ways in which it is deficient (in terms of speech delivery and production values). I lack technical prowess and a charismatic personality and am self-conscious about being on camera—but hopefully with practice, I will improve. The main thing is, I want the work of these artists to be known and shared. I hope to demonstrate how art can pull us deeper into the biblical story, revealing new and sometimes surprising angles or simply helping us dwell there with love and intent, and also how it’s possible to do “theology through art,” relying not exclusively on academic writings or sermons (great as they both are) to do that important work.

While I have created a video for a scholar friend’s art history channel, this is the first on my own channel—which I invite you to subscribe to. (I need at least 100 subscribers to create a custom URL for the channel.) I don’t have imminent plans for more videos, but I am starting to brainstorm ideas and will probably send out a survey to my blog subscribers to get a better sense of what you all would want to see. Several of you have requested that I get into video making, but I’ve been slow to move on it, wanting to better figure out my niche and what I could uniquely bring to such a dense market. I realize that video is a content format that is overwhelmingly preferred to blog posts these days, so I want to make use of it. But videos are much more time-consuming and difficult to produce without having a budget or a team behind me, and also not having the direct access to artworks that museums and other entities have. Please pray for this upcoming venture!

CROSS-CONTINENTAL MUSIC VIDEO: “Song of Hope” by Praveen Francis and friends: This Afro-pop music video is a collaboration between musicians, dancers, and technicians in India, Guatemala, the UK, Republic of the Congo, Cameroon, and the United States. The project was initiated by Praveen Francis, a music producer and sound engineer from Coimbatore in Tamilnadu, India, who wrote the original composition. The languages are English, French, and Lingala, but the hook is a series of nonlexical vocables: “Na na na . . .” [HT: Global Christian Worship]

The video was released April 10, 2021, shortly before the second COVID wave hit India. “This Pandemic has ravaged all our lives,” Francis says. “But we will not give up. We will fight back because there is still HOPE.”

In addition to the video, there’s an exhibition catalog available for online viewing. It features a series of artist interviews, which address topics such as silence, the importance of process, and the nature of parable. And of course it includes photos of all the works in the exhibition. Let me highlight just two.

The first is by my friend Marianne Lettieri [previously], whose work is informed by her “increased awareness of the enchantment of everyday actions and moments—the sequences of ordinary human existence.

I would hate to think that life is just the important events. You get married, you get an award, have a baby. These are big things, and some are what we call sacraments in the church, but I’ve realized that peeling potatoes, fixing the faucet, and other common tasks make up most of our daily living. The big moments are a part of it, but it’s the string of these small moments that are present and sacred acts we need to pay attention to.

Much of her art illuminates the value of domestic labor, such as Fenêtre de Réparateurs, which sets forty-one used pincushions, still bearing the threads put there by their previous owners, into a wooden framework, evoking a stained glass window. “This work speaks about a culture of menders—people who choose to save, repair, and transform damaged things,” says Lettieri.

Second, Traveling Shoes is a performative sound work by longtime collaborators Justin Randolph Thompson and Bradly Dever Treadaway, from 2013’s Flux Night in Atlanta. It involved a two-seat shoe-shine “chariot” being dragged through the crowds, stopping to gold-leaf the shoes of anyone who was interested. All the while, on the back of the chariot, a three-piece jazz band played the song “Dem Golden Slippers,” which uses clean, shiny shoes as a metaphor for living an unstained life in preparation for Jesus’s return. The original performance, which lasted around three hours and has been re-created in several different contexts since then, is archived in a twelve-minute video, which is what was on display at Bethel. To go alongside, the curators asked the duo to submit a photograph from the performance series; they went the extra mile and used a photo as the basis of a new mixed-media work that incorporates objects used in the performance, such as a mechanic’s rag and an antenna, which is what I’ve posted here.

RELIGIOUS POEMS SAMPLER: “Original and unorthodox poems about theology,” compiled by Mark Jarman: An excellent selection of ten poems, all but one available for reading from the Poetry Foundation. Jarman is a leading poet of the twenty-first century and a Christian. He was too humble to include one of his own poems on the list, but his poetry is much in this vein, so for number 11 I would add Jarman’s “Five Psalms,” from his collection To the Green Man (2004).

This is part two of a three-part series based on some of my art encounters at the Christians in the Visual Arts conference held June 13–16, 2019, at Bethel University. This post covers a handful of notable artworks I was introduced to through slides; part three will cover art I experienced in person through the conference’s exhibitions and auction. Read part one, about the Sacred Spaces tour of Minneapolis, here.

In his introductory remarks to the 2019 CIVA conference, Chris Larson cited Lauren Bon’s Artists Need to Create on the Same Scale That Society Has the Capacity to Destroy, the eponymous work of the Brooklyn Rail–curated exhibition running through November 24 at the church of Santa Maria delle Penitenti in Venice, a collateral event of the Venice Biennale. It’s a great rallying quote, one that I hadn’t heard before but that I can really get behind.

The theme of the conference was “Are We There Yet,” a deliberately broad question which I took as referring to the conversation between serious art and serious faith, which CIVA has been heavily engaged in over its forty-year history. We talked about where “there” is and unpacked other aspects of the conference title, but I’m sidestepping those discussions to focus on the visual.

Wayne Roosa oriented our gathering by introducing us to two conceptual art projects by Simon Starling that offer opposing archetypes of the journey. The first, more aspirational one is Shedboatshed (Mobile Architecture No. 2), which involved the movement of a wooden shed from one Swiss riverside location to another. “This journey of 8 km downstream from Schweizerhalle to the centre of Basel was undertaken through the temporary mutation of the shed into a boat. This boat, a copy of a traditional Weidling, was made only with wood from the shed and was subsequently used as a transport system for the remaining parts of the structure. The shed already included an oar of the type used on Weidlings nailed to its facade as decoration. In its new location, the Museum für Gegenwartskunst, the boat was then dismantled and once again re-configured into its original form, but for a few scars left over from its life as a boat, it stands just as it once did several kilometres up-stream” [source]. 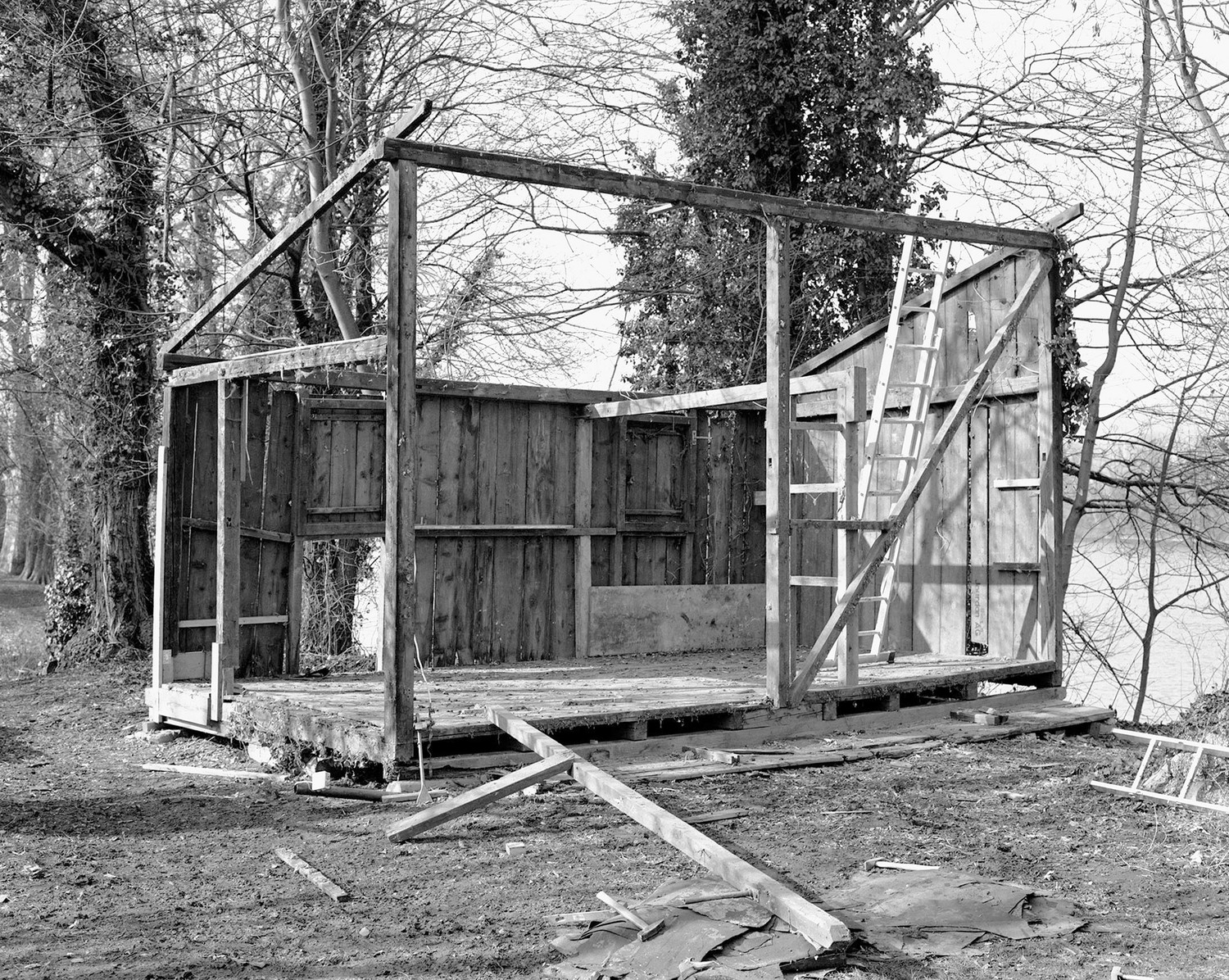 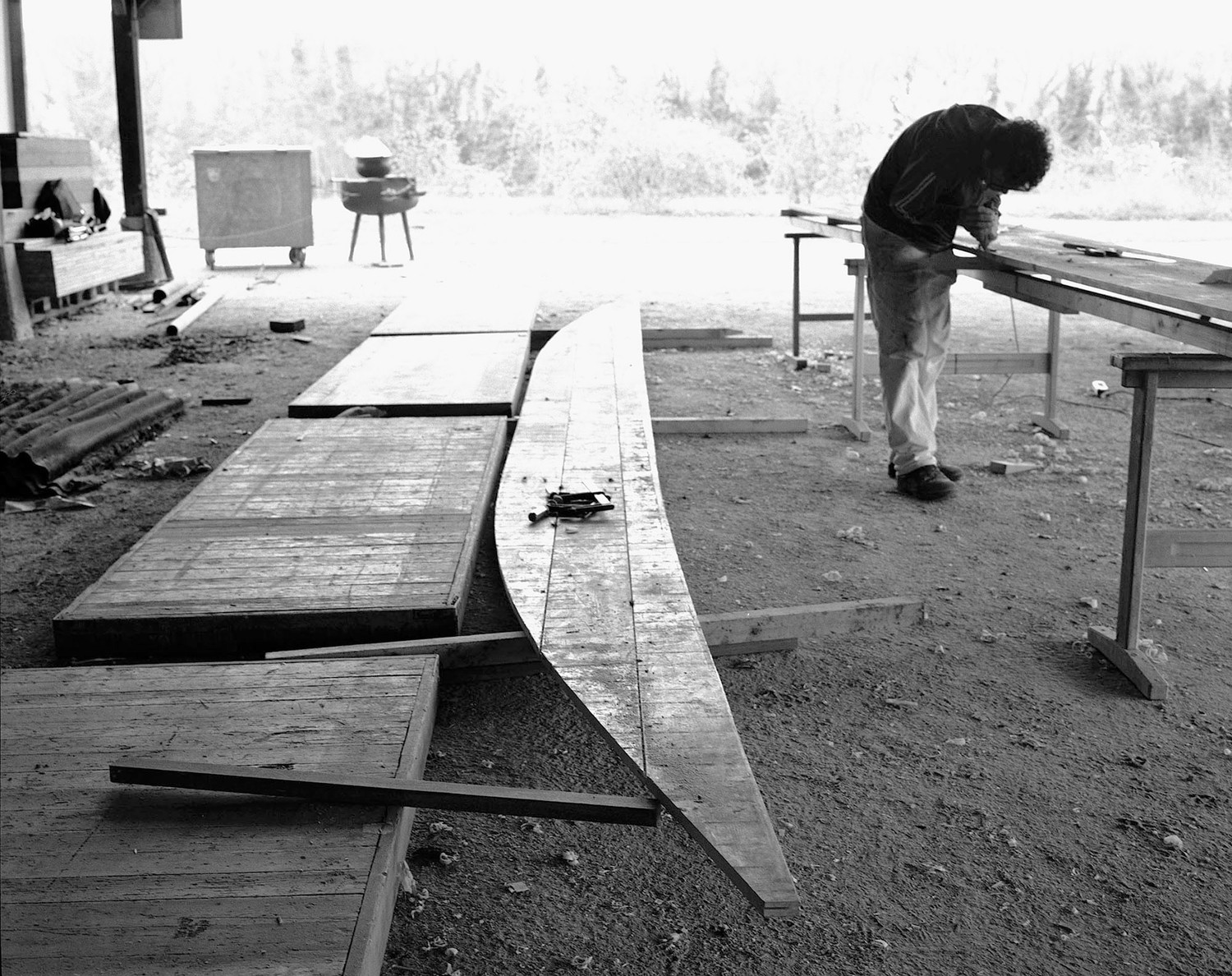 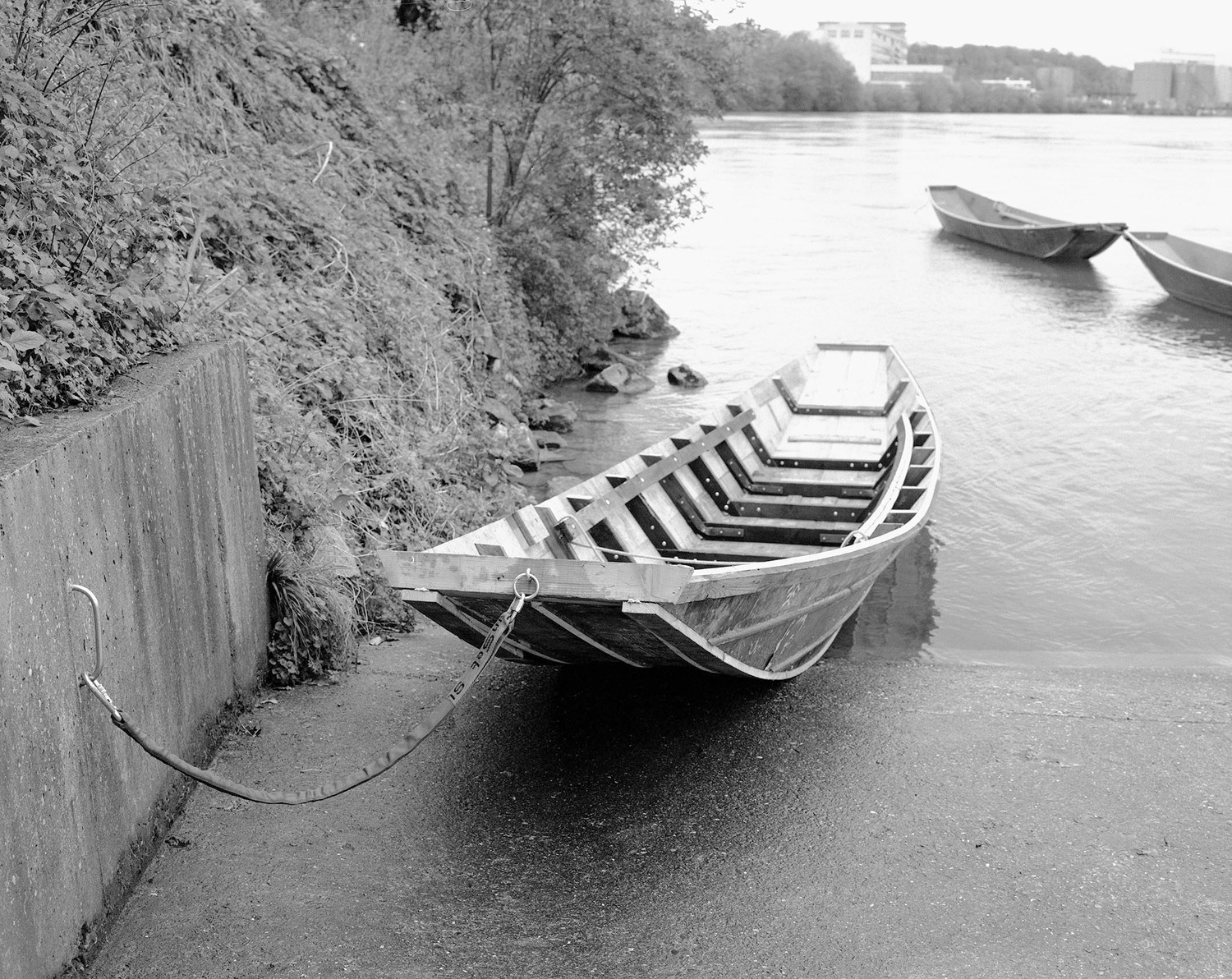 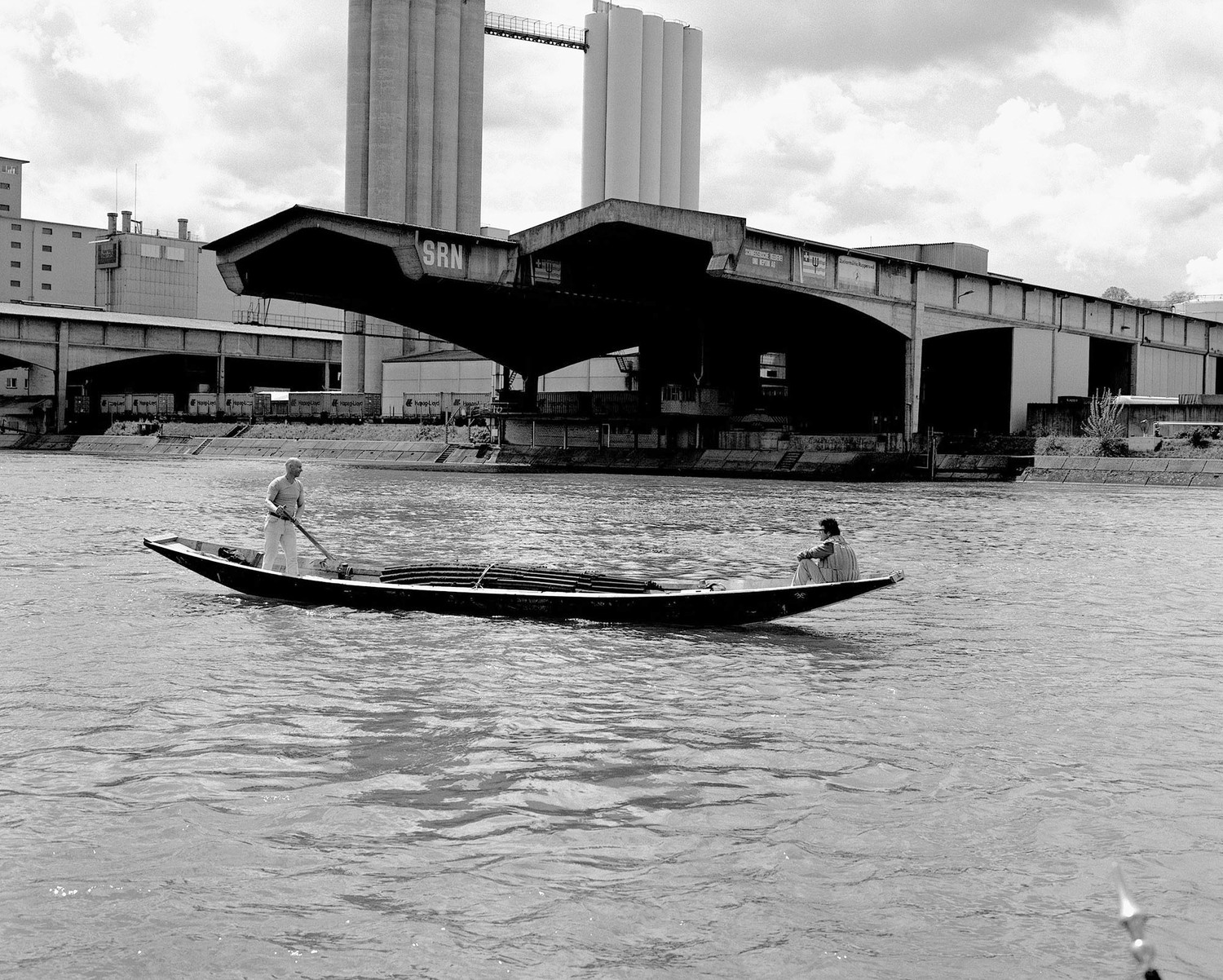 “What I’m doing in a gallery situation,” says the artist, “is presenting a journey that I’ve been on, a process I’ve undertaken, and I’m asking for people to look at that in reverse. The circularity of many of the projects is a device to tell a story and it means that if you’re making a work about process, if you start and end in the same place, then somehow the journey becomes the important thing.” I think of lines from T. S. Eliot’s “Little Gidding”: “What we call the beginning is often the end / And to make an end is to make a beginning. / The end is where we start from”—and further down, “And the end of all our exploring / Will be to arrive where we started / And know the place for the first time.”

The second Starling work we considered was Autoxylopyrocycloboros, “a four-hour entropic voyage made across Loch Long [in Scotland] on a small wooden steamboat fuelled by wood cut piece-by-piece from its own hull.” This theatre of destruction ends with the boat’s debris floating—or sinking, as it were—in the water, Starling and his crewmate bobbing in their life vests somewhere out of frame. (The journey is presented in gallery settings as a series of thirty-eight color transparencies.) The title is an extrapolation of “ouroboros,” the mythical serpent who eats his own tail. 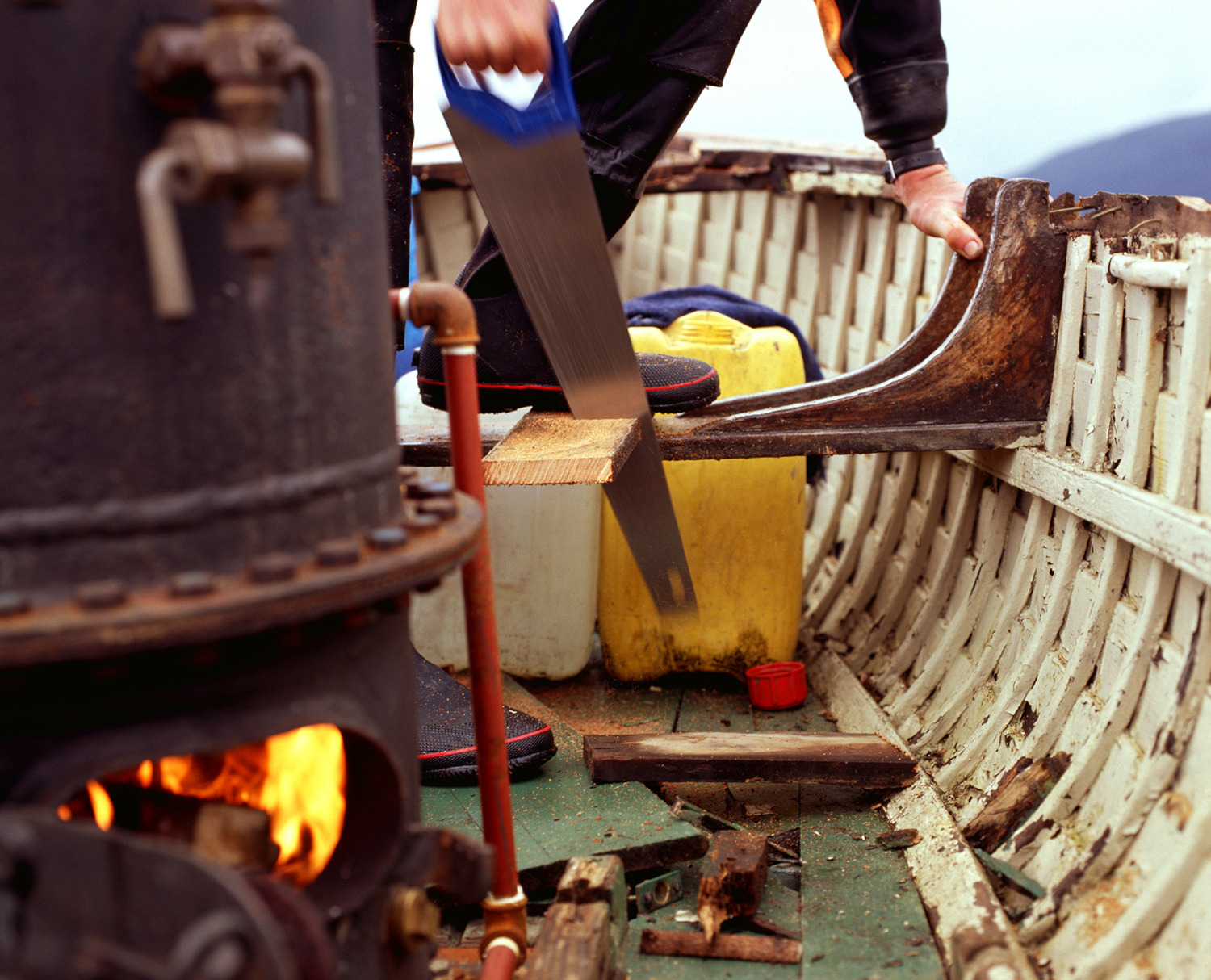 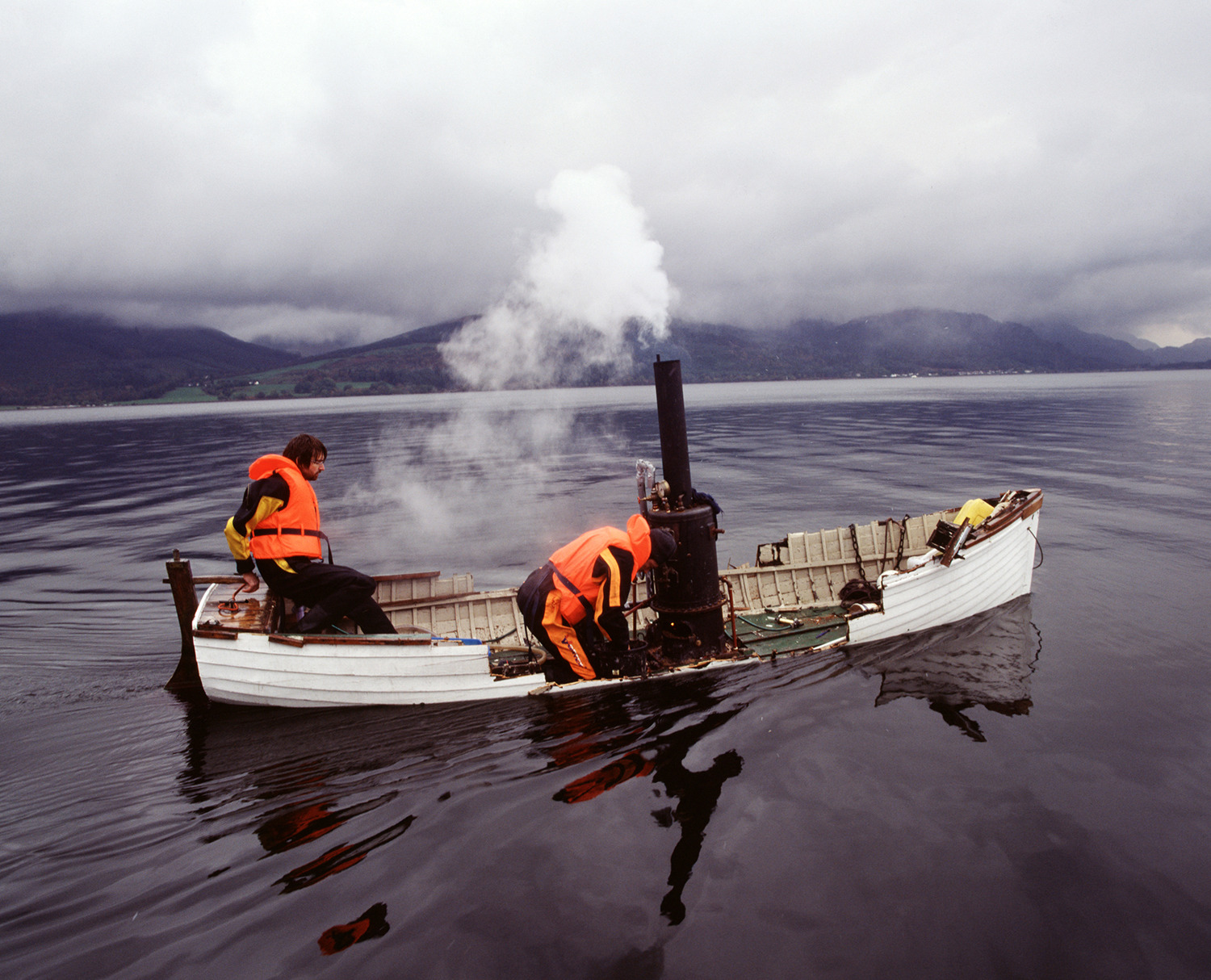 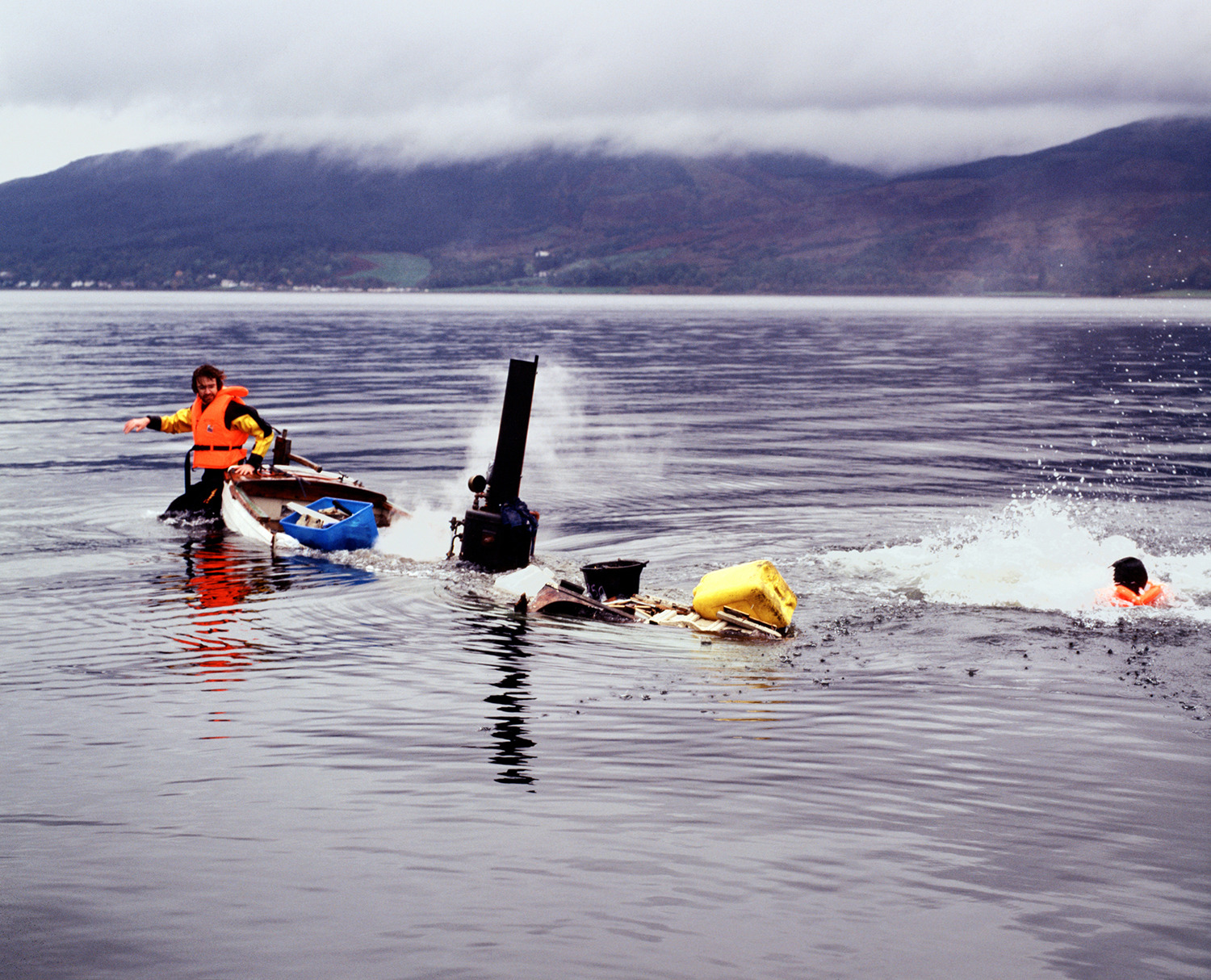 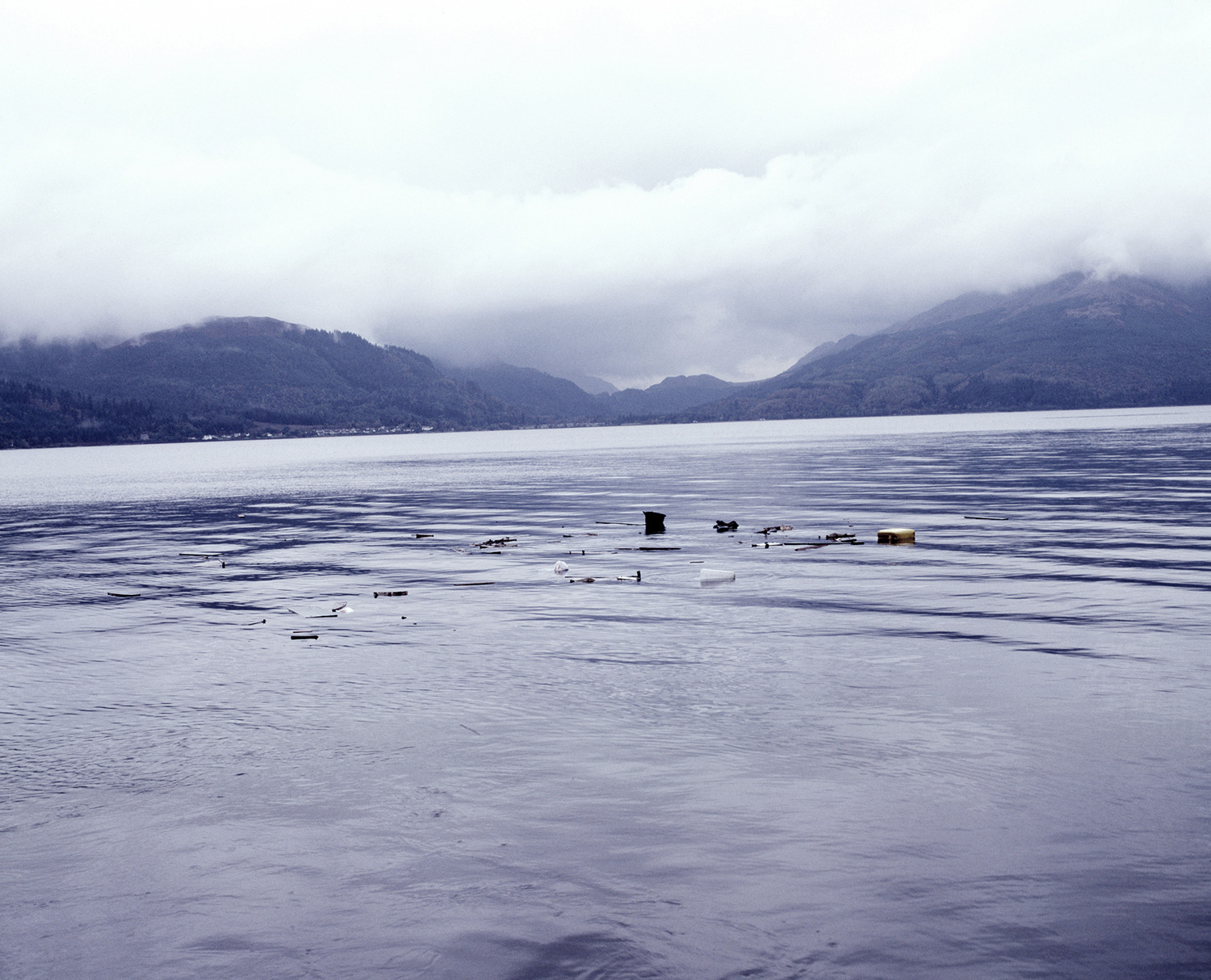 Roosa suggested that as we navigate the waters, we can either self-destruct, eating ourselves alive, or we can deconstruct and then reconstruct. As an organization, we ought to be committed to the latter—taking apart the structure we started with and putting it back together.

Over two and a half days of conference, there were several artists’ panels that brought to the fore some truly exciting work. I especially enjoyed hearing artists Sedrick and Letitia Huckaby, a married couple, discuss their different artistic media, styles, content choices, and creative processes, and the way their work interacts with the other’s. Both explore themes of family, faith, and African American heritage.

Sedrick Huckaby is a painter, draftsman, printmaker, and sculptor known for his portraits. His earliest body of work is a series of impasto paintings of his maternal grandmother, Hallie Beatrice Welcome Carpenter (“Big Momma”), inside her old wood-framed house in Fort Worth, Texas. These are so tender—they show her resting, drinking coffee, reading her Bible, getting ready for church, talking with family. After Big Momma died, he continued making in absentia portraits of her by depicting accessories she wore or household spaces that bear her imprint—The Shoes She Wore, The Altar Dresser. Sedrick is now renovating Big Momma’s house to serve as a creative project space for the neighborhood.

Family has long been the primary subject of Sedrick’s art. I love the 2006 portrait he painted of his wife seated at the foot of their bed and holding their firstborn son, Rising Sun. Mother and child are surrounded by family quilts, made by aunts and grandmothers. The opening between the two wall-hanging quilts forms a square halo around Letitia’s head.