I spend a lot of time “art surfing” the Internet, following click-trails that start maybe with a Google image search of a subject I’m researching and then end up somewhere totally different. One of those trails this weekend led me to the work of Ukrainian New Wave artist Igor Paneyko.

Paneyko was born on March 2, 1957, in the city of Stryi in the Lviv Oblast region of western Ukraine, in the foothills of the Carpathian Mountains. From 1975 to 1981 he studied at the Lviv State Institute of Applied and Decorative Art (now the Lviv National Academy of Arts), then spent a year working in Khiva, Uzbekistan. He currently lives and works in Uzhhorod, Ukraine, near the Hungarian border, in the region known as Transcarpathia.

Other than this general biographical information, I can find little else about the artist. An exhibition promo from 2012 suggests that he is a private person who’s “wary of publicity,” though he does exhibit his work. Using the Ukrainian spelling of his name, Игоря Панейка, yields more results than a search in English, but information is still sparse.

Many of Paneyko’s paintings are of visionary landscapes with floating, haloed figures. Candles, moons, and ladders (see Genesis 28:12) are often featured. Much of his work seems to me to carry on the legacy of Symbolism, a late nineteenth-century art movement that developed new and often abstract means to express psychological truth and the idea that behind the physical world lay a spiritual reality. Symbolists sought to give form to the ineffable, such as dreams and visions, and they emphasized emotions, feelings, ideas, and subjectivity over realism, often addressing the themes of religious mysticism and death. Gustav Klimt and Odilon Redon are two of Symbolism’s greatest artists.

Below is a compilation of some of Paneyko’s paintings that I find particularly appealing. I don’t know the specs for any of them, besides the year of those that have it painted large enough on the canvas, but I’ve linked each of them to its online source.

These first five are, to me, visually stunning. Ground and sky are not discernible from each other but rather interpenetrate, creating sacred space and evoking wonder. 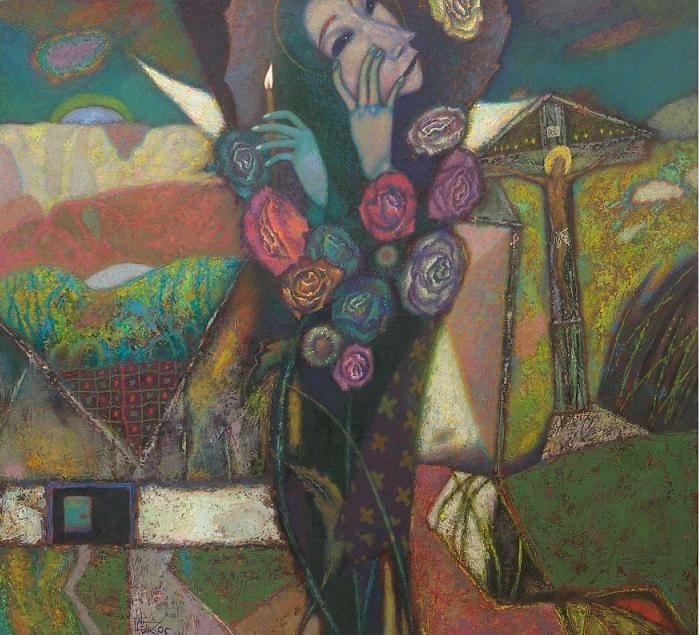 ^ From 2005, we have a woman with a candle standing in contrapposto and covered in multicolored roses. The thin gold band around her head suggests a halo, and the purple burst behind her an aureola. It appears that she has come to pay devotion to Christ, as a wayside crucifix, whose patibulum supports the candles of previous pilgrims, is planted in the background. In the center of the woman’s chest, a little red kernel is encircled with light, representing the love that’s set aglow by her encounter; her loins, too, bear this mark—a possible allusion to the erotic language used by medieval mystics to describe their union with Christ.

^ Here a haloed woman—maybe an angel (are those wings behind her?)—carries a load of pears and apples. To the left is a rowboat with four other haloed figures, one of them a baby; to the right, a garden. Some associations that come to my mind are Eden, Flight to Egypt, ship of salvation, fruit of the Spirit.

^ In this one, the focal point is the bottom left corner, where a yellow-green-blue crescent moon balances atop a patchwork mountain, and a row of nightcapped sheep saunters sleepily away. On the other side of the mountain a newspaper party hat floats over a cross-marked graveyard. Maybe it’s because we’ve just come out of Christmas, but I think of Bethlehem after Christ’s birth: the Judean hills alive and vibrant, having been touched by angel song; the shepherds’ charges seeking rest after the flurry of activity; and spreading a shadow over the celebration, the Massacre of the Innocents—Herod’s extermination of the town’s infant male population.

^ Here the figurative element consists of a woman in a brown overcoat and white kerchief, keeping vigil on a lakeshore at night. In the water, a little boy appears to be playing on the mast of a ship, underneath a sky that’s studded with seven stars. This scene unfolds in the crown of a large tree. All throughout are pathways, portals, cross-forms, and little red blossoms or cherries. 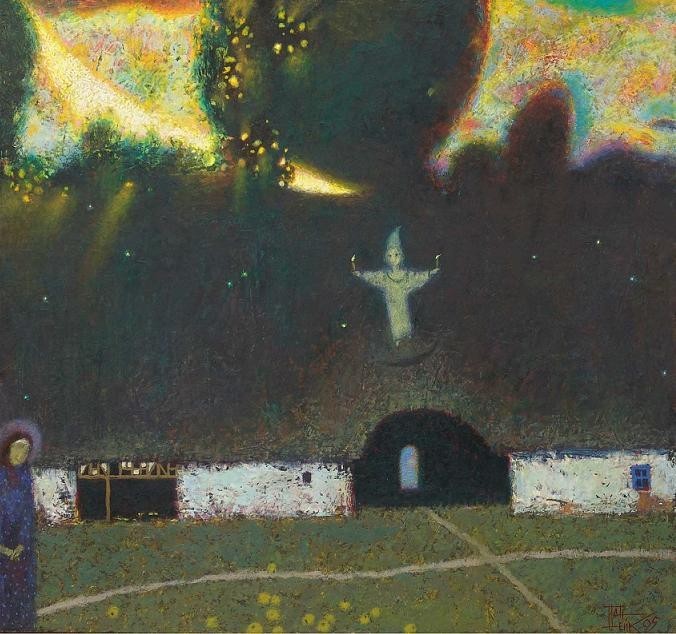 ^ Here a child in a white gown and cap approaches the foreground with arms outstretched, a candle in each hand, his ground simultaneously forest and roof. Just below him a narrow pathway leads into a dark tunnel, blue sky peeking out on the other side. A woman in a blue dress and burgundy kerchief waits with hands folded, head bowed, on a lawn strewn with apples.

^ Here’s that kid and that tunnel again.

Here’s a painting I like for its expression of pure agony:

And here are two I like because of how they visualize the act of seeing: 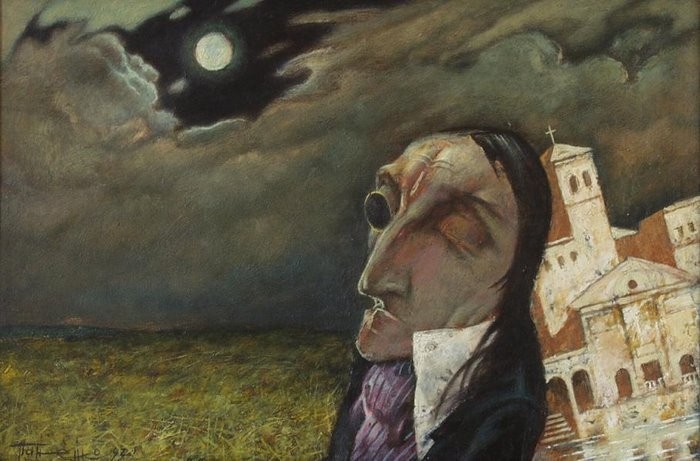 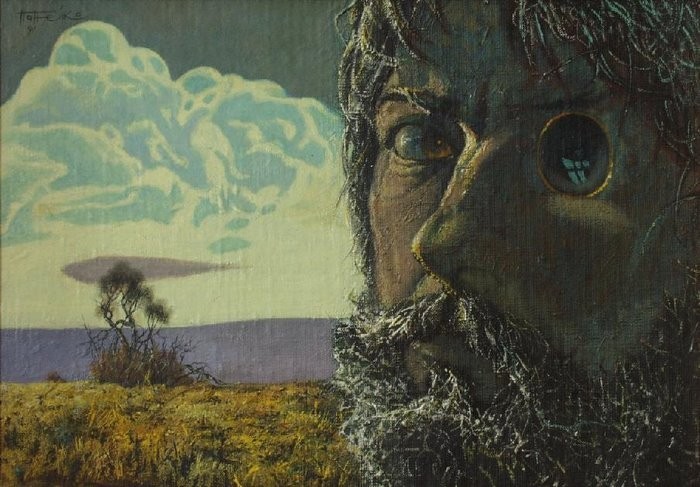 Paneyko has done several paintings reminiscent of a Madonna and Child, in which the mother figure is stretched out as if on a cross. Here are five of them (content advisory: stylized nudity below): 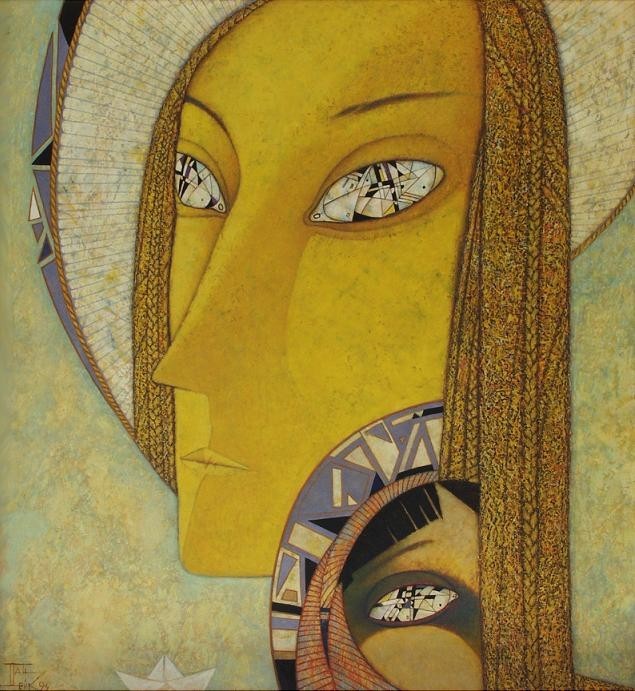 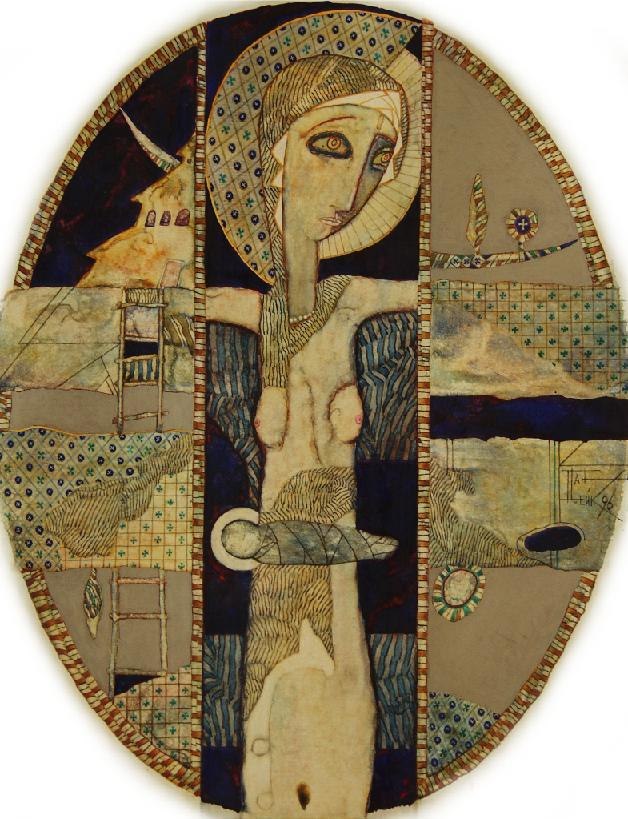 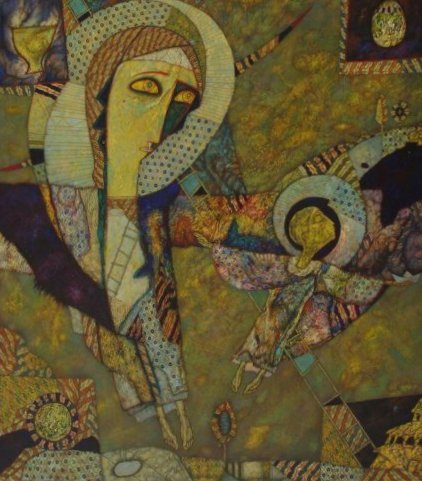 It appears that Jesus is either stabbing himself with a violin bow or playing music on his chest as if it were a violin. At the foot of the cross there’s a bare-bottomed man leaning over; a blindfolded man with a hammer trying to position a nail into Christ’s foot; another blindfolded man with wings on his head, à la Hermes, playing a pan flute; Moses with one of the tablets of the law; and I can’t make out the figure on the extreme left, but he looks like he’s snorkeling. In the midground there’s a wailing veiled woman with a faceless baby; a young redheaded nude whose hair is tangled up in the violin Christ is holding; and an old, snarling, bald woman standing between two pieces of torn fabric (the temple veil?). The crow on the right has a sponge in its beak. I’m not quite sure what’s going on here. This has got to go down as one of the most unusual Crucifixion paintings I’ve seen! Any interpretations? 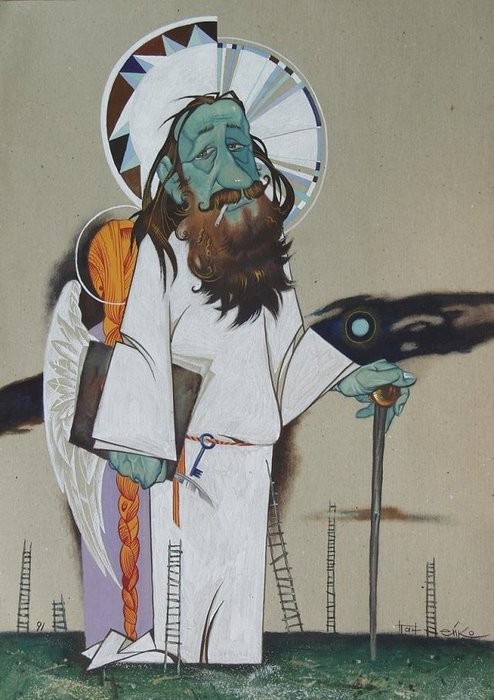 ^ Here’s a painting that depicts—I’m guessing because of the key on his waist—Peter with the Book of Life. He leans on a staff and has a cigarette hanging out of the corner of his mouth. An angel with a Rapunzel-like braid stands beside him with her back to us, apparently gazing into a dark cloud.

^ Here’s a 1996 portrait of some historical figure—I can’t make out the Ukrainian inscription. Judging from the ruff, I’d say he’s from sixteenth- or seventeenth-century western Europe. He holds a paintbrush and appears to be wearing a zibellino (a scarf-like wrap made out of an animal pelt)—which was actually a women’s fashion. The halo gives him the air of a saint. Any guesses?

And here are two final Paneyko paintings that compel me: a figure with sunflowers, and a female saint who looks sad. 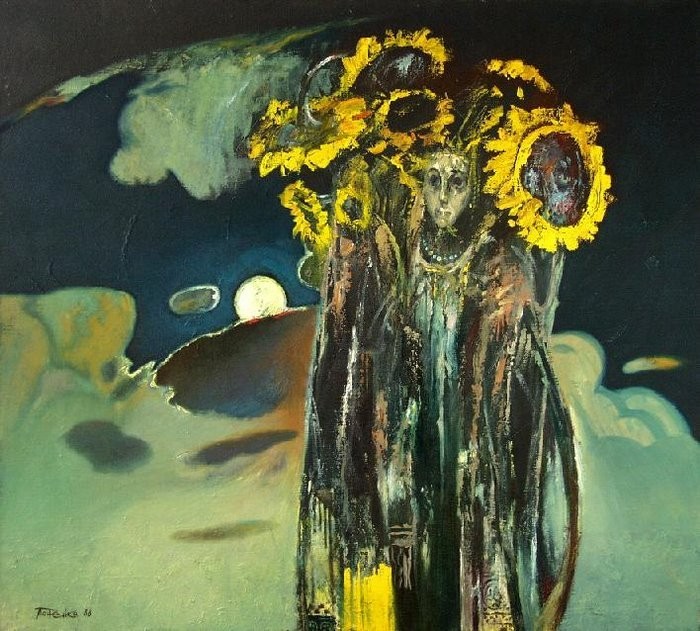 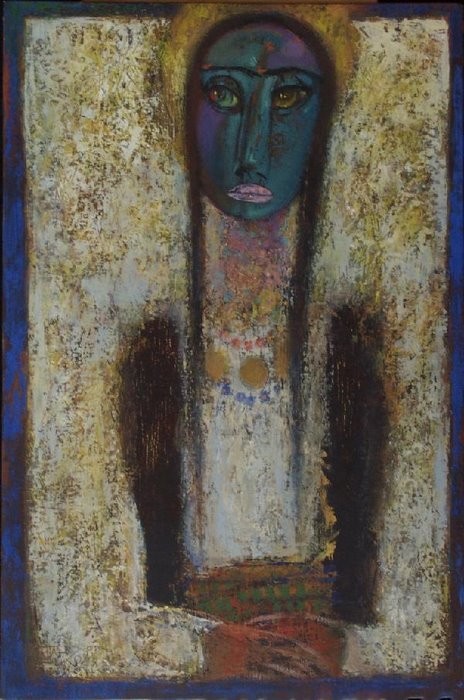 2 thoughts on “Spiritual imagination in the art of Igor Paneyko”