A type of “Man of Sorrows” image, the Dead Christ Supported by Angels is a devotional trope originating in the late Middle Ages. It typically shows a naked, half-length Christ standing up in a sarcophagus, his wounds prominently displayed so as to invite meditation on his suffering. One or more angels tend to him—they may embrace him, mourn his passing, unwrap his burial shroud (to give viewers a better look), display instruments of the passion, keep him propped up in the tomb, or, as we will see below, prepare to welcome him back to life.

(Related post: “Bill Viola’s Emergence as a Picture of the Resurrected Christ and the New Birth of Believers”)

One of the earliest examples of this imagery is the marble relief at the Gemäldegalerie in Berlin. Originally a lectern adornment for the pulpit in Pisa’s cathedral, it shows two angels unveiling Christ’s body, presenting it to us like a eucharistic host. Their raised arms and slanted legs form a mandorla-like frame around him.

The fifteenth-century alabaster sculpture shown below was formerly partially painted, and the angels formerly wore diadems on their foreheads (one survives). “This is an immensely virtuoso carving for such a small scale,” writes art historian Kim W. Woods—notice the texture of the angels’ wings and hair, the lining of Christ’s ecclesiastical robe, and the plants at Christ’s feet. Notice, too, the intricately carved emblem on Christ’s brooch: a pelican pecking at her breast. Reputed to have fed her young with own blood, the pelican was a common medieval symbol of Christ’s sacrificial love.

In the Leipzig Man of Sorrows by Master Francke, Christ and three angels stand in a shallow space in front of the cross. It’s unclear whether Christ is on the edge of death or has already crossed over. In his left hand he holds the scourge—or tries to (his hand is either weak and cramped with pain, if alive, or if dead, afflicted rigor mortis). His other hand gestures to his side wound, still wet with blood, as if, like Thomas, he’s about to probe it. Peeking up over Christ’s shoulder is a full-size angel, who tenderly drapes him with a diaphanous veil. At the bottom of the painting two smaller angels kneel on either side, the one holding the birch, the lance, and the sponge-topped reed, the other holding the pillar of flagellation; they both struggle to support the dead weight of Christ’s arms.

The angels at Christ’s waist in Master Francke’s Hamburg Man of Sorrows, instead of holding instruments of torture, hold a lily and a sword, symbols of the Last Judgment. (In visualizations of that event, Christ is often shown with a lily coming out of his right ear, signifying an “innocent” verdict for the faithful, and a sword coming out of his left ear, declaring guilty those who did not know him.) Three angels at the top remove the cheap, mock kingly garment the Romans had thrown on him to replace it with his due: a finely embroidered robe befitting a true king.

In the highly unusual Imago pietatis (“image of pity”) by Francesco Benaglio, two angels drape (or undrape) the upright Christ with a rich blue damask backed with a cherry-red lining. His sarcophagus is decorated with a small tondo depicting Adam and Eve at the foot of the cross, underscoring the redemptive purpose of Christ’s death. Symbols of the passion are scattered throughout the painting. In the foreground is the pillar, the spear, the dice, the rooster, and the ladder (by which Christ’s body was taken down from the cross).

What is especially unique about this painting is the manner in which the other symbols are displayed: hanging from a red cord that’s suspended from the two arms of the cross. From left to right, they are a knife (which Peter used to cut off the ear of his attacker in Gethsemane); a pot and pair of hands (referring to Pilate’s washing of his hands); a shield (meaning unclear); a purse and head (the money Judas took to betray Christ and his subsequent suicide by hanging); an implement of torture (unclear); a lantern with two scourges (references to the arrest and whipping of Christ); a pitcher (probably a reference to the vinegar wine offered to Jesus on the cross); a shirt (Christ’s, which the soldiers played for); a hammer (for the nails of the Crucifixion); a strip of white cloth (either a loincloth or a cloth for entombment); a pair of pincers (with which the nails were removed); and a bowl and a hand (possibly a reference to Judas dipping his hand into the common dish at the Last Supper—see Matthew 26:23).

For an even more detailed description of the painting, visit its Sotheby’s auction page.

Rosso Fiorentino’s The Dead Christ with Angels is the most famous depiction of the subject—and more than that, it’s considered one of the greatest paintings of the late Italian Renaissance. Last Easter Eve William R. Cross wrote a fantastic reflection on the painting for ArtWay, titled “The Liminal Moment.” Here’s an excerpt:

The Christ he shows is not exactly dead (as the title says), but between death and new life. This is the liminal moment of the Resurrection. The tensile strength in this monumental figure’s crossed feet (three toes just touching the gray ledge) offers the first hint: arteries throbbing, these feet are about to twitch. Then we notice the large funerary candles. They are bending; the wax has softened in the heat radiating from this once-dead body. Just now, beyond our sight, the stone barring the opening to the tomb has rolled away. Early morning light has begun to pour in from the left, and a gust of wind has extinguished the candles, blowing smoke to the right. Christ’s still body begins breathing in the fresh air entering this dank space.

In addition, Khan Academy (a free online learning center) produced a five-minute video lesson on the painting as part of its Mannerism curriculum.

I’m not sure whether the following James Ensor image represents angels tending to the dead Christ or instead angels ministering to Christ in the wilderness (Matthew 4:11). (The wild, expressionistic strokes make it difficult to discern whether the wounds are present.)

This next one is not quite of the same iconographic category, but because it features the dead Christ with angels, it’s worth lumping in. Christ is laid out on his burial slab, with two angels hovering over him, their wingtips just barely touching. The composition is meant to evoke the ark of the covenant, a sacred container that had gold cherubim on the lid. Inside the ark the Israelites carried the two stone tablets of the Ten Commandments, Aaron’s rod, and manna, all of which point to Christ—the fulfillment of the law, our great high priest, the bread of life. God’s presence was said to have dwelt between the lid’s angels, and here in Christ’s tomb, between the two angels, we see just that: a glowing light, God’s presence, summoning Jesus forth from the grave.

Anna Kopeć-Gibas’s contemporary Epitaphios icon shows the dead Christ laid flat in his tomb (the tilted perspective enables us to see his full body), a solitary angel sidling up to him to hold his wounded hand. Like Fiorentino’s painting, it’s possible this one depicts the early moments of the resurrection—the dark-blue glow of the sky could be the early-morning darkness of Easter Sunday.

These final two images, again, are not quite of the “Dead Christ Supported by Angels” variety, but they feature both figures, and in creative ways.

Julia Stankova’s In the Heart of the Earth shows a shrouded Christ asleep in the cradling arms of a large angel who looks down on him with both pity and adoration. This is a Holy Saturday image—Christ adrift in the belly of a whale but watched over by the Divine; Christ a buried seed of grain, quietly germinating.

The angel in Arcabas’s Holy Saturday painting has a lot of personality—as he sits tight for Sunday morning, relaxedly hovering beside Christ’s body in the tomb, he stares at us with a knowing gaze and a grin that says, “Just you wait!” Stylized candle flames flicker at Christ’s head and feet, a dim prefiguration of the burst of resurrection glory to come. 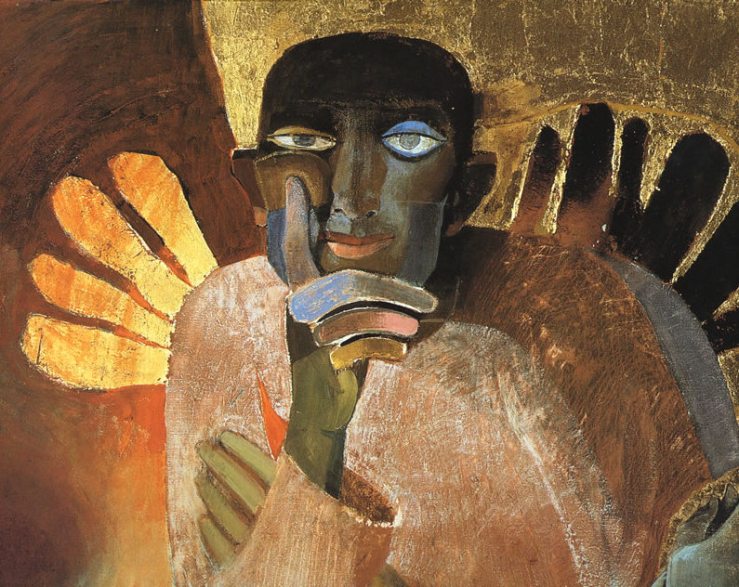 One thought on “The Dead Christ Supported by Angels: A Thematic Survey”