RADIX ARTICLE: “The Seven Works of Mercy: How two Dutch artworks—one Renaissance, one contemporary—can help us recover an ethic of neighborly care” by Victoria Emily Jones: When I was in the Netherlands last year, I saw lots of artistic representations of what are called the seven works of mercy, derived from Matthew 25. (Even after the Protestant Reformation, the subject remained popular among Dutch artists, who delighted in representations of everyday life.) In this article, published last week, I share just two. One is a multipaneled painting, now at the Rijksmuseum, commissioned in 1504 by the Holy Ghost Confraternity in Alkmaar, which ran an almshouse that provided medical care for the sick and housing for the poor (social welfare programs were carried out by the church in those days); notably, in each contemporary townscape, Jesus stands among the afflicted—a theologically loaded artistic choice. The other artwork is a set of photographs by Thijs Wolzak on display inside Rotterdam Cathedral, which feature community service organizations in action, caring for drug users, undocumented immigrants, and others. (Note: The chapel was in a bit of disarray when I was there, with light fixtures disassembled all over the floor and a ramp blocking my entrance, hence the messy staging of my photo! See a professional photograph in the article link, including photos of individual panels.)

It’s interesting to consider the overlap of Christian and civic duty the images present and the way in which they function(ed) in their disparate spaces. The more explicitly theological Alkmaar polyptych was originally owned by a lay brotherhood and sited in a church beside the collection box, and its primary purpose was “to stir up . . . to love and good works” (Heb. 10:24), and to financial giving—but it is now in a large, government-run art museum, where it’s viewed mainly as an art historical object. The Wolzak piece, on the other hand, was commissioned as a permanent installation inside an active church that is also a heritage museum and something like a community center, with the purpose of highlighting the charitable work being done in the city. I like how Wolzak helps us to see where some of the needs lie in contemporary society and examples of tangible ways they might be met, through such services as safe-injection sites (for those suffering from heroin addiction) or the Lonely Funeral Foundation (for the anonymous dead).

The summer 2020 issue of Radix magazine also includes an interview with Mark Labberton, president of Fuller Theological Seminary, on his book The Dangerous Act of Loving Your Neighbor: Seeing Others Through the Eyes of Jesus; an interview with D. L. Mayfield on her book The Myth of the American Dream: Reflections on Affluence, Autonomy, Safety, and Power; Martin Buber on genuine dialogue; Simone Weil and the “kinship of affliction”; a review of the film Just Mercy; and more.

NEW BOOK: Off the Walls: Inspired Re-Creations of Iconic Artworks: This March on social media, the Getty Museum issued the #GettyMuseumChallenge, inviting art lovers to channel the stir-crazy energy of COVID-19 quarantine into crafting themselves, their families, and their pets into masterpieces of world art and posting the photos online. By May there were at least 100,000 re-creations uploaded to the Internet—246 of which are featured in the new book Off the Walls, released this month by Getty Publications. All profits from the book will go to the charity Artist Relief to support artists facing financial emergencies to the coronavirus pandemic. This is such a fun way to get people to engage with art!

“Hallelujah (Come Bless the Lord)” by September Penn: September Penn is a singer, songwriter, performance artist, worship leader, and cofounder of The Power of Song Inc., an organization that educates about social justice issues through song, theater, and art. She wrote “Hallelujah” while directing the Kaleo Choir at Fuller Theological Seminary, where she earned an MDiv this year with a focus on Worship, Theology, and the Arts. The song was released September 3 as a single on all music-streaming platforms.

“Field Guide” by Tony Hoagland: A few weeks ago SALT Project reprinted this poem that celebrates the ordinary in nature—along with brief commentary and a stunning macrophoto of a dragonfly. An excerpt from the opening chapter of Ralph Waldo Emerson’s essay “Nature” is referenced: “If the stars should appear one night in a thousand years, how would men believe and adore; and preserve for many generations the remembrance of the city of God which had been shown! But every night come out these envoys of beauty, and light the universe with their admonishing smile.” (The poem is from Hoagland’s 2010 collection Unincorporated Persons in the Late Honda Dynasty, published by Graywolf Press.)

from the current issue of Image: Image journal is the one piece of mail I most look forward to receiving every quarter—full of poetry, visual art, literary essays, and short stories with a spiritual sensibility. In its current issue, no. 105, some of the poems I particularly enjoyed were “Trench Coat” by Cameron Alexander Lawrence, on the accumulation of things; “Pastoral with Wheat” by John Hart, on fatherhood as beatitude, and as a continual lesson in dying to self; “Duet” by Chelsea Wagenaar [previously], about the “music” of the ordinary moments of motherhood, like tending to your child’s bee sting; and “The Eighth Sacrament” by Peter Cooley, on grief, written after the death of his wife, Jacqueline.

COMMUNITY ART PROJECT + INSTALLATION: Light the Well by Anna Sikorska: Last month artist Anna Sikorska led the congregation of St. Martin-in-the-Fields in creating a constellation of cracked, translucent porcelain globes, lit from within like lanterns and linked together—a visualization of Paul’s words in 2 Corinthians 4:6–12, about our hearts being clay jars whose fragility and brokenness enable the light of Christ to shine through all the more. Light the Well was installed at St. Martin’s on November 11, and since November 19 the individual lanterns have been selling for £10 a piece to benefit New Art Studio and Art Refuge UK, charities working with art therapy in the context of migration and displacement. Associate vicar Jonathan Evens delivered a beautiful reflection on this artwork and the scripture that inspired it, as well as a prayer and benediction, which you can read in full here. 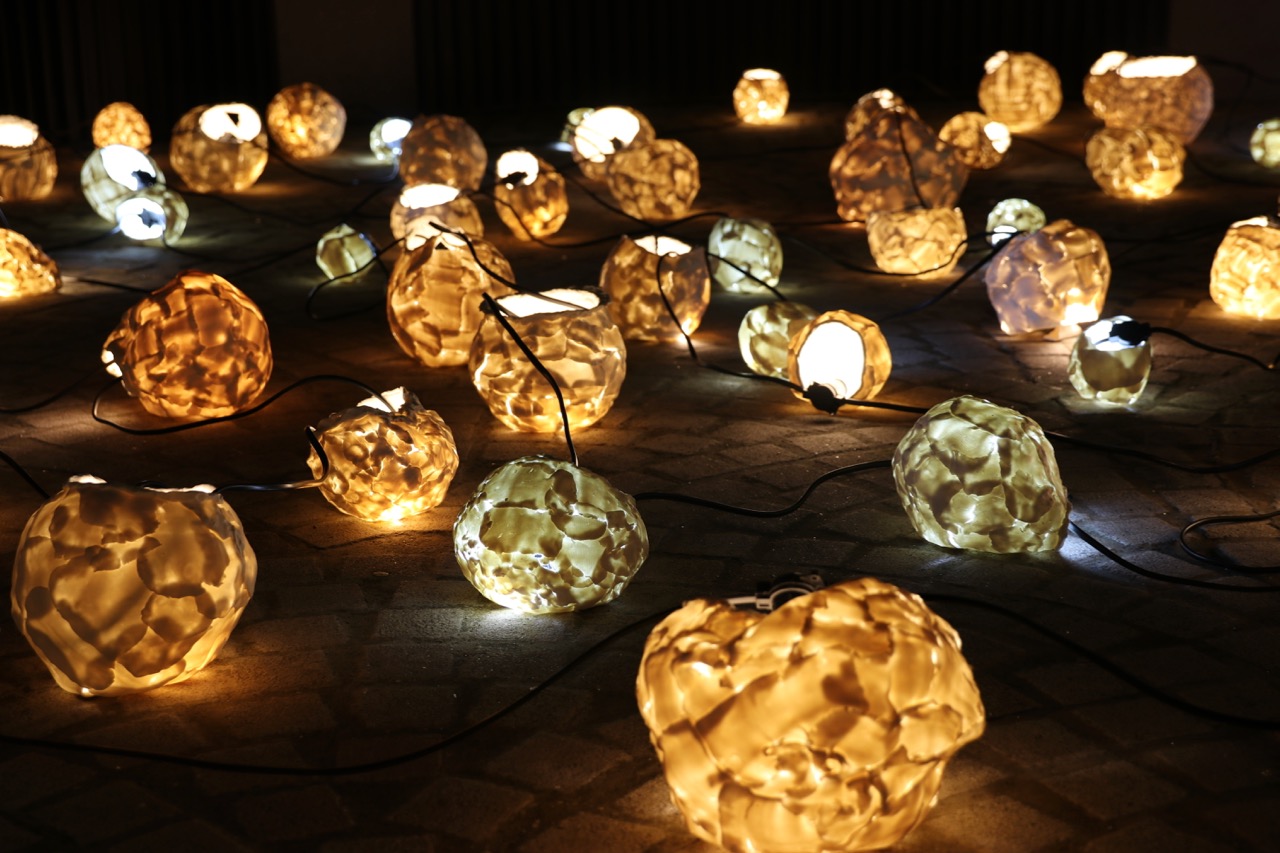 I love it when churches use art not merely to decorate or prettify the building but to further the congregation’s engagement with scripture and to foster shared doing and seeing.

“City of David” by the Gray Havens: The Gray Havens, a “narrative pop folk duo” from Nashville made up of married couple David and Licia Radford, released a new Christmas single on November 17—recorded on an iPhone! Listen to the song and watch some of their “making of” process in the video below. God the Father often gets overlooked during this season, so I like that the refrain reminds us that “the Father sent him [the Son] down.” [Purchase here]

“Human for Me” by Katy Kinard: Released last year on the album God of Fireflies, this song praises God for assuming full humanity—for not circumventing any frustrating or painful aspect of it. [Purchase here]

“The Christmas Story in Art” at the National Gallery, Washington, DC: Gallery lecturer David Gariff will lead a 75-minute discussion about paintings in the collection that depict the birth of Jesus, including one of my favorites, Duccio’s Nativity with the Prophets Isaiah and Ezekiel. (Click on the link to see a full list of works.) The event is free and geared to an adult audience. To participate, meet in the West Building Rotunda at 1 p.m. on December 9 or 10, or 2 p.m. on December 14, 18, 20, 21, or 22.

“Adoration of the Kings” Facebook Live tour at the National Gallery, London: Friday, December 15 at 9 a.m. GMT, director Gabriele Finaldi will be exploring Jan Gossaert and Pieter Bruegel the Elder’s paintings of the Adoration of the Magi. This “tour,” offered exclusively online, will be broadcast live on the Gallery’s Facebook page, and a replay version will be available on the channel afterward.

POEM: “Scale” by Chelsea Wagenaar: Chelsea and I went to the same small North Carolina church as kids, back when she was a Henderson and I a Hartz, so we share a heritage of learning Bible lessons from Butch the Dragon and competing annually in the Bean Bag Relay at the AWANA Olympics. Now she is an award-winning poet, a Lilly Fellow, a lecturer in Valparaiso University’s English department, and a mom!

Inspired by her pregnancy, the poem “Scale” is full of metaphors that revel in the wonders of prenatal life—the womb is a “winterplum sky,” the cluster of baby cells “untufted cotton,” the belly a “Lenten moon.” The central theme, which Chelsea cleverly plays around, is Psalm 139:16, a praise verse by King David: “Your eyes saw my unformed substance; in your book were written, every one of them, the days that were formed for me, when as yet there was none of them.”

Chelsea’s poem is especially appropriate for Advent, a season of pregnancy in which we position ourselves retrospectively with Mary, letting our hearts expand as we wait expectantly for that marvelous deliverance, the coming of the Christ child.