Soaring 150 feet into the air against a Rocky Mountain backdrop, the United States Air Force Academy Cadet Chapel in Colorado Springs is a National Historic Landmark and one of Colorado’s most-visited manmade attractions. It was designed by Walter Netsch Jr. of Skidmore, Owings and Merrill, the architectural firm responsible for the planning and design of the entire academy, and is a recipient of the American Institute of Architects’ Twenty-Five-Year Award. Construction of the Cadet Chapel began in 1959 and was completed in 1962. It was dedicated in 1963. 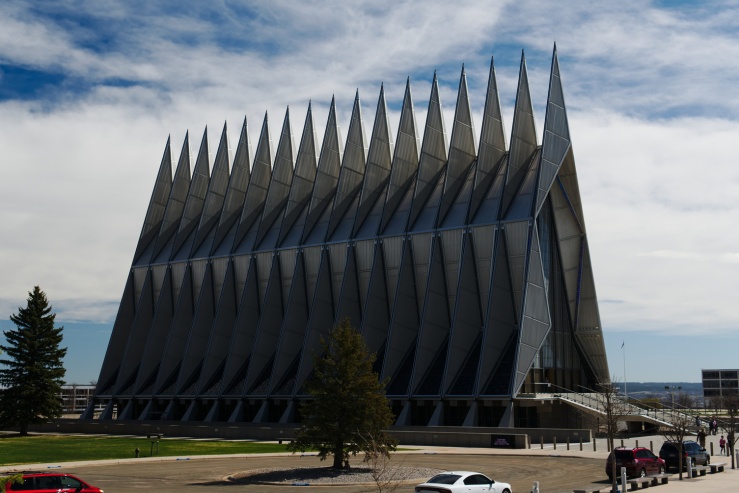 The Cadet Chapel was designed to house three distinct worship spaces—Protestant, Catholic, and Jewish—on two levels, with a large “All-Faiths Room” on a third (bottom) level available to members of other faiths. In 2007 a Buddhist Chapel (the Vast Refuge Dharma Hall) was added, and more recently a Muslim prayer room, and outside there is a Falcon Circle for the Earth-Centered Spirituality community (pagans, Druids, Wiccans, etc.), dedicated in 2011. Because of the building’s sound-proofing and separate entrances, different services can be held simultaneously without interfering with one another.

I visited the Cadet Chapel last year shortly before it closed in September for a major renovation and restoration project needed to address water damage. It is scheduled to reopen again in fall 2023.

The most striking feature of the exterior is its seventeen spires, made to resemble jet fighter wings. I must admit: though it is an impressive structure, and I’m fully aware it is a military chapel, the evocation of warplanes for a worship space is a little unsettling. But the design choice does give the building great height—it points to the heavens as do the great medieval Gothic cathedrals of Europe, meant to turn the eye upward toward God. 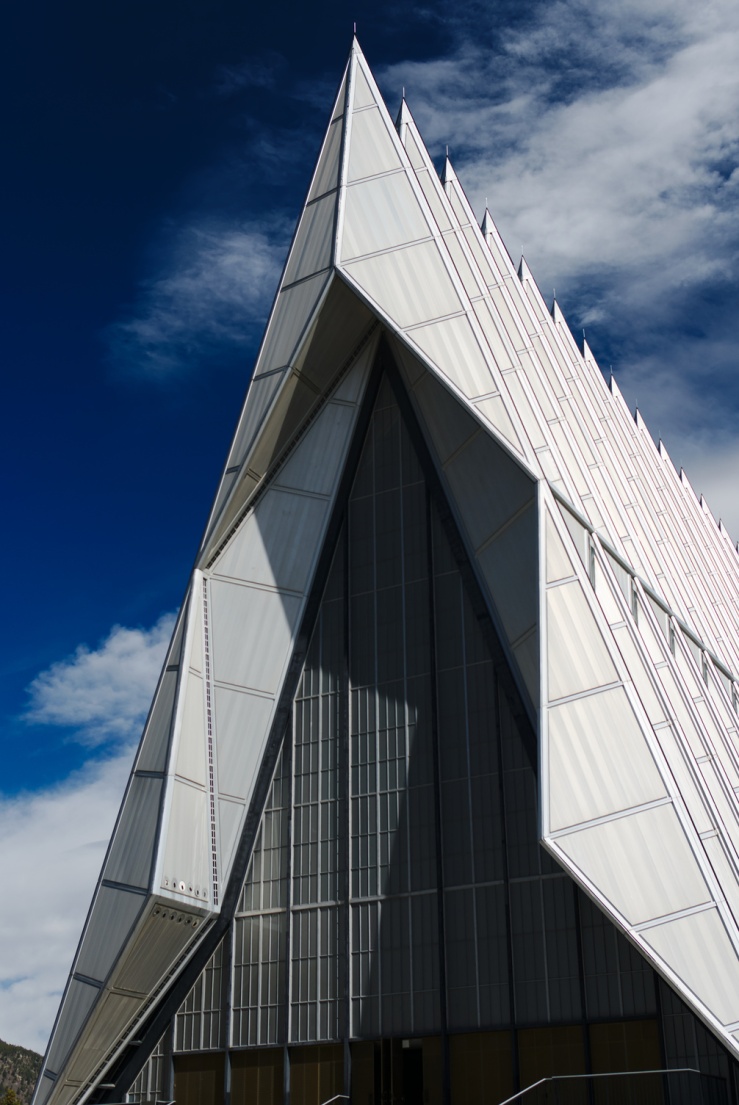 The steel frame of the chapel comprises one hundred identical tetrahedrons, each weighing five tons and enclosed with aluminum panels. The surfaces of the outer panels are striated so that they reflect light differently throughout the day, depending on the sun’s position.

The chapel is situated on a terrace that overlooks part of the campus as well as beautiful mountain vistas. 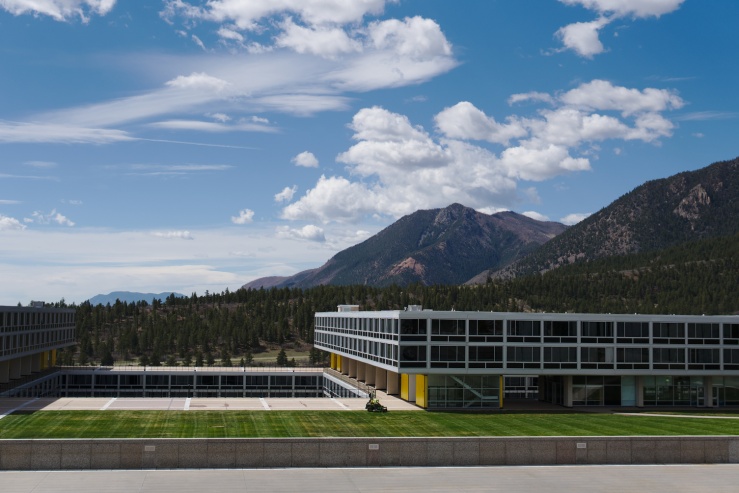 The front façade faces south—an atypical orientation for churches, which are traditionally built on a west–east axis, but a choice made, I’m assuming, to best utilize the sunlight for the interior decoration (see next section).

To reach the main entrance you have to ascend a wide granite stairway that leads up one story to an uncovered front porch. Walk inside, and you’re in the narthex (lobby) of the Protestant Chapel.

The Protestant Chapel is by far the largest worship space within the Cadet Chapel, taking up the whole main floor—a choice made based on the religious demographics of enrolled cadets at the time of the building’s construction in the early sixties. (An article published shortly after the chapel’s dedication reported that 68% of cadets listed themselves as Protestant, 29% Catholic, and 2% Jewish, with a few listing other faiths or agnosticism.)

Though the exterior of the Cadet Chapel is, as I experienced it, somewhat cold, sterile, severe, the interior is incredibly warm and genial. Its vertical lift is spectacular. Stained glass strip windows provide ribbons of color between the tetrahedrons and progress from darker to lighter as they reach the altar, with some of the nearly 25,000 dalles (small, thick glass slabs) being deliberately chipped to produce jewel-like facets. The play of colored light across vault, floor, and pews was my favorite part of this space.

END_OF_DOCUMENT_TOKEN_TO_BE_REPLACED

The sixth-century illuminated Syriac manuscript known as the Rabbula Gospels (after the signed name of its scribe) contains one of the earliest depictions of Christ’s ascension into heaven. A full-page miniature, it illustrates the narrative from Acts 1:6–11—but not strictly.

One embellishment to the story is the centralized presence of Mary on the bottom level. She is not mentioned in the biblical account of the event, but her attendance was likely. Here she stands in a frontal, orant pose and, unlike the other disciples, is nimbed. Whereas those around her are wracked with confusion, she understands the deep mysteries of her son’s birth, death, resurrection, and ascension, and she stands ready for his return.

Among the crowd is the apostle Paul—an anachronistic insertion, as his conversion occurred after the Ascension. The book he holds, signifying his contributions to the New Testament, is one of his identifying attributes.

All these elements became standard in medieval iconography of the Ascension.   END_OF_DOCUMENT_TOKEN_TO_BE_REPLACED