The light he was returns
Unto the Light that is.
—Wendell Berry

My grandpa, Richard Joseph Hartz, passed away on May 22 at age ninety-two. A cradle-to-tomb resident of Mercer County, New Jersey, he was a simple man who loved his Lord, his family and friends, and his work. He was faithful, caring, contented, ingenuous, and conservative in every sense of the word. Clocks, cars, and Phillies baseball were among his hobbies. He got thrills from things like cereal box prizes (his favorite was a plastic spoon that lights up—he said, facetiously, that it helps him find his mouth), Dollar Tree purchases (“Can you believe this only cost a dollar?”), and fish sandwiches from Burger King (I don’t think I ever saw him so excited as when he unwrapped a BK gift card for his ninetieth birthday). 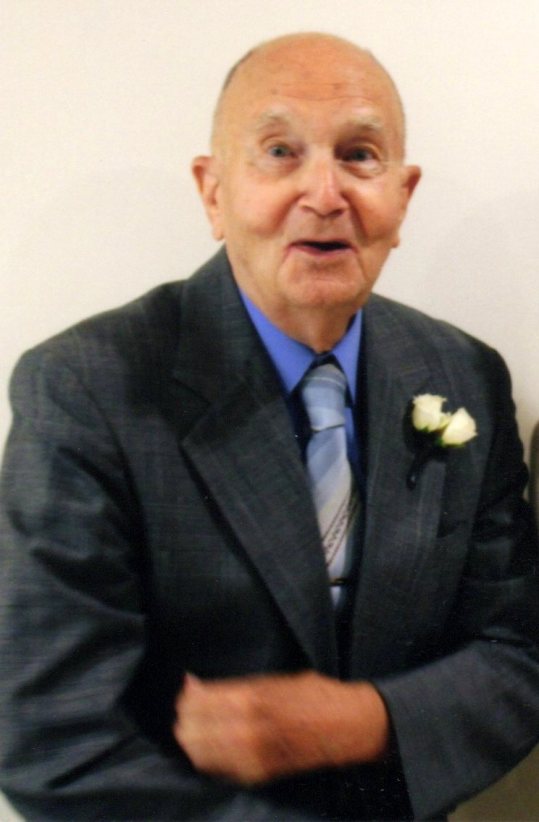 Pop-Pop’s Bible never gathered dust; he read it every morning, along with Our Daily Bread. His constancy in this regard is something my dad inherited. It is because of Pop-Pop’s (and Mom-Mom’s) religious faith, which they lived and breathed and passed on to their kids, that I am a Christian. It is the greatest treasure I have ever received.

The highlight of Pop-Pop’s week was always Saturday-morning breakfast with the ROMEOs (“Retired Old Men Eating Out”)—a moniker bestowed affectionately by his sister Theresa to describe him and his group of cronies. In flat cap and cardigan, he’d be dressed to go. Scrambled eggs and coffee was his custom, and a plate of sausage split with his brother-in-law Don.

Pop-Pop’s most distinctive, and most beloved, trait was his joke telling. His jokes were mainly of the Reader’s Digest variety—that is, clean and corny. After making sure he had our attention, he’d start in, wide eyed and serious, all the way up to the punchline, when he’d break down chuckling. His repertoire wasn’t too large, so during any one visit, we’d hear the same joke at least twice, and then again the next time we saw him. But we’d always laugh as if it were brand-new to our ears.

If a bear was chasing you and up ahead there was a tree on one side and a church on the other, would you run up the tree or into the church?

Response: I don’t know—into the church?

With a bear (bare) behind?

[When we’re eating corn] We’re having a chicken dinner!

I went to the doctor’s, and he gave me a prescription for smart pills. When I saw the bill, I couldn’t believe it. “$100!” I said. “These aren’t worth that much!”

If we were to shrink your head to the size of your brain, you could wear a peanut shell for a Panama hat.

One time he floored us all with a real grade A insult at my younger brother’s expense. We were posing for a photo, and Rob, clowning around, bent over and stuck his head between his legs. Pop-Pop, camera in hand, retorted, “You’ll have to smile, Robbie, so that I know which end’s your face.” Ooo, burn!

Pop-Pop laughed a lot. One of the most enduring mental images I have of him is him sitting at the head of the dinner table, white powder on his lips from a Kramer’s donut, his arms folded up at the elbow and fingers interlocked, and his eyes squinting with glee.

The other image I have is him sitting on his corner of the couch, right leg crossed over left, watching TV with considerable intensity. It was the news, mostly. Or the Philadelphia Phillies. Nighttime television was an event for him. During NBC’s Dateline and ABC’s 20/20, we weren’t allowed to make a peep, or we’d be reprimanded. We became master whisperers. 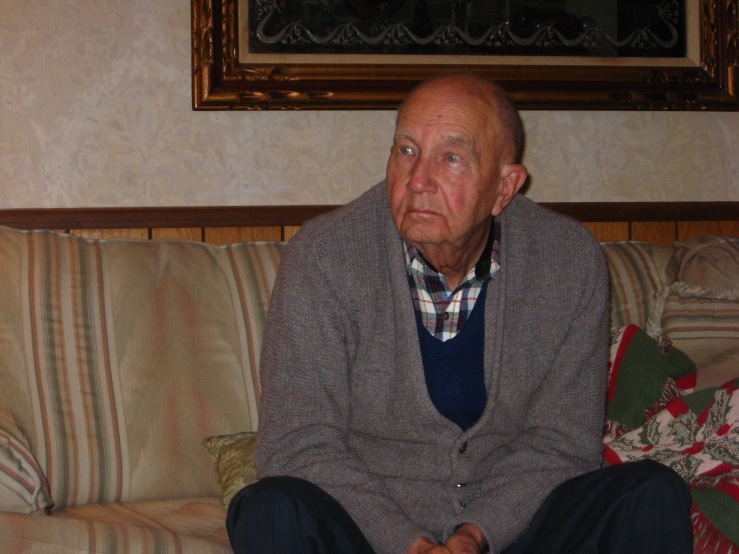 Last year, Pop-Pop offered me a summation of his life, distilling it down to three things: “I pumped gas, I drove a bus, and I cut grass.” The first two refer to the main jobs he held as an adult—owner of a gas station, and later, a bus driver for the Hopewell Valley Regional School District—and the third, to his two-acre lawn, which he maintained himself all the way up until a few years ago.

Pop-Pop took pride in his long life and the general fitness of his body. He didn’t require a walker until earlier this year, when he was rehabilitating from hip-replacement surgery, and though he suffered three heart attacks, the first at age fifty-six, he made full recoveries (“I’m resilient”). To fill silences, he’d sometimes remind us of his age: “I’m ninety years old.” “I’m ninety-one.” “I’m ninety-two.” I think it surprised him, even though his own dad had lived to the ripe old age of ninety-three.

Over the last two years, though, Pop-Pop’s feebleness began to show, and he couldn’t deny it. “It’s no fun being old,” he told me. His driver’s license was taken away, then the keys to his riding mower. These restrictions were a source of frustration to him. His body was betraying him.

I am grateful that he has now cast off the body to be with God. Now he’s mobile again, and freer than ever. No overworked heart, weak knees, broken bones, or bruising. Just glory. He’s soaring on wings, running without weariness, walking without faintness. And on the Last Day, his body, perfectly remade, will be reunited with that part of him that is already in the presence of his Creator.

I’m not sure if anyone is ever really ready to say good-bye to a loved one, but the Easter season, which we’re in the thick of, has certainly prepared me to accept, even celebrate, Pop-Pop’s passing. For the past six weeks, I’ve been saturating myself in songs and scripture, art and praises, of Christ’s resurrection, the bedrock of the Christian’s trust. The new life made available by that historic rising is one we can claim both in the here and now and, on an immeasurably richer scale, the hereafter. Pop-Pop’s death has hurled the focus of my devotional reflections from the former to the latter. “New life in Christ” has a different ring to it when I consider it as a literal translation from one plane of existence to another, undertaken by one I know and hold dear.

The timing, like I said, is providential. Not only is this the Sixth Week of Easter, it’s also the week the church celebrates Jesus’s ascension (tomorrow, May 25). So my devotions have naturally linked Luke 24:50–53 and Acts 1:9–11, which record Jesus’s being “taken up into heaven,” with the ascent of Pop-Pop’s soul. Bonnie Van Voorst’s painting Ascension, which traces a path from the darkness of earth, through layers of cloud, to the brilliance of heaven, has become for me an image not just of Christ’s ascension, but of Pop-Pop’s. He has returned to the divine Source. As Wendell Berry wrote in one of his Sabbath poems, “The light he was returns / Unto the Light that is.”

One of the songs I’ve been resting with throughout Easter, and even more so since I received the news about my grandpa on Monday, is “Jesus Lives, and So Shall I.” Originally written in German by Christian F. Gellert (1757) and set to a seventeenth-century hymn tune, it was translated into English by John Dunmore Lang (1826). It proclaims the powerlessness of death for the Christian, whose hope and trust is in the risen Lamb.

Jesus lives, and so shall I.
Death! thy sting is gone forever!
He who deigned for me to die,
Lives, the bands of death to sever.
He shall raise me from the dust:
Jesus is my Hope and Trust.

Jesus lives, and reigns supreme,
And, his kingdom still remaining,
I shall also be with him,
Ever living, ever reigning.
God has promised: be it must:
Jesus is my Hope and Trust.

Jesus lives, and by his grace,
Vict’ry o’er my passions giving,
I will cleanse my heart and ways,
Ever to his glory living.
Me he raises from the dust.
Jesus is my Hope and Trust.

Jesus lives, I know full well
Nought from him my heart can sever,
Life nor death nor powers of hell,
Joy nor grief, henceforth forever.
None of all his saints is lost;
Jesus is my Hope and Trust.

Jesus lives, and death is now
But my entrance into glory.
Courage, then, my soul, for thou
Hast a crown of life before thee;
Thou shalt find thy hopes were just;
Jesus is the Christian’s Trust.

(See also another contemporary setting by the Green Carpet Players of Knoxville.)

“Jesus lives, and death is now but my entrance into glory. Courage, then, my soul, for you have a crown of life before you. You shall find your hopes were just; Jesus is the Christian’s trust.”

Pop-Pop has passed through the gates of glory, has exchanged flat cap for crown of life. His hopes have been proven more fruitful than any of us on this side of eternity can imagine. He now ever lives, ever reigns, with Christ. 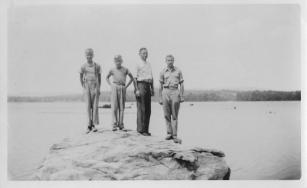 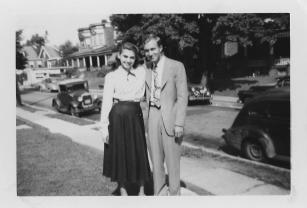 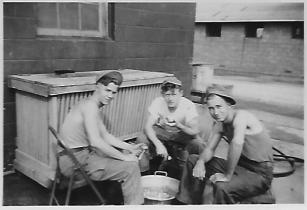 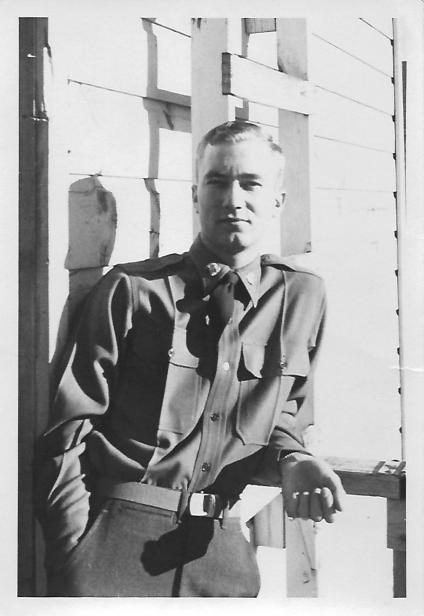 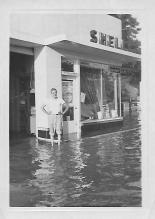 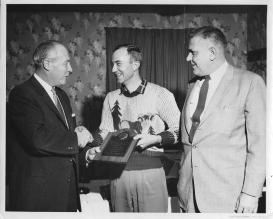 Pop-Pop receives an award from Shell Oil Company for five years of valued business association, 1958. (My family and I like to laugh at his choice of dress for the occasion.)

Pop-Pop and Mom-Mom with kids Ron (my dad) and Karen at their annual vacation spot in Wildwood, New Jersey, ca. 1963. 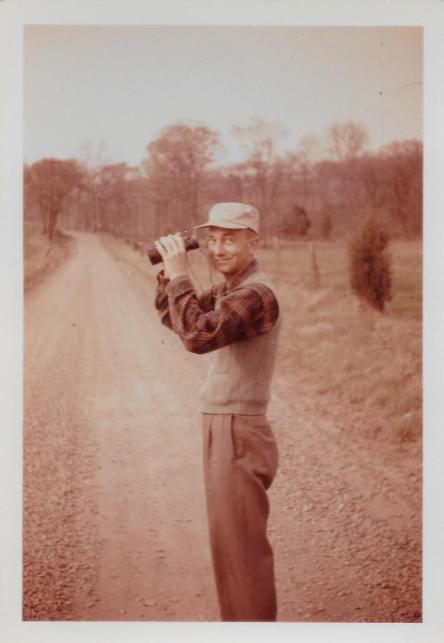 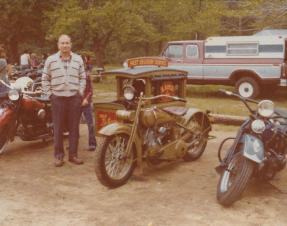 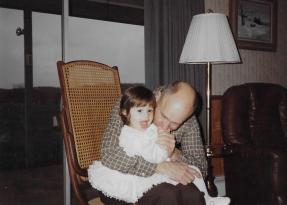 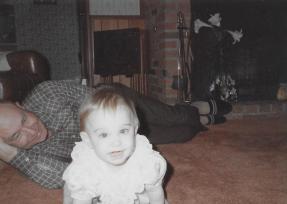 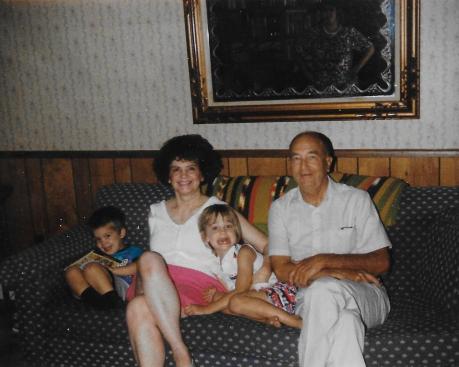 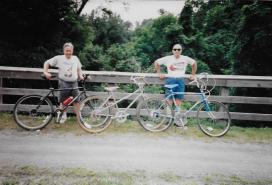 Riding bikes along the Delaware River with brother-in-law Don, July 1996. 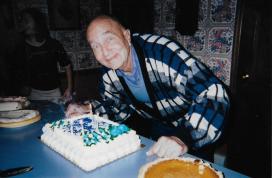 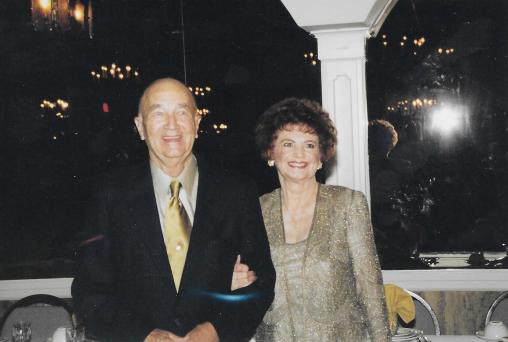 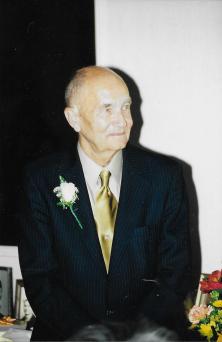 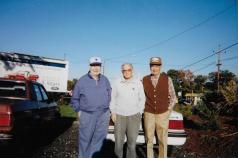 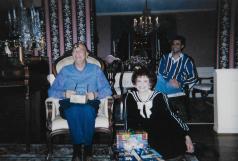 Opening Christmas presents (with my dad in the background), early 2000s. 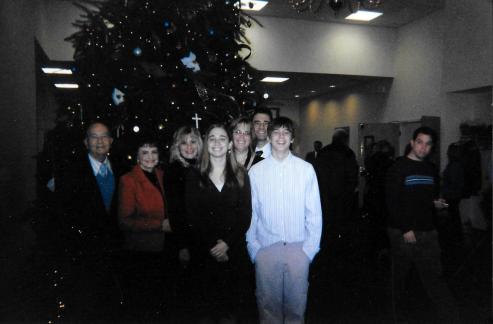 2 thoughts on “A eulogy for Pop-Pop”