Jude is one of the least-studied books of the Bible, certainly among the epistles, probably owing in part to its shortness (only one chapter) and to its overall harsh, judgmental tone. A polemic against heretics, it lacks the robust soteriology of Romans and Christology of Hebrews—and yet purity of doctrine is precisely what this book aims to protect, as Jude warns against the danger of false teachers, libertines, who would enter the church surreptitiously and corrupt the Way. 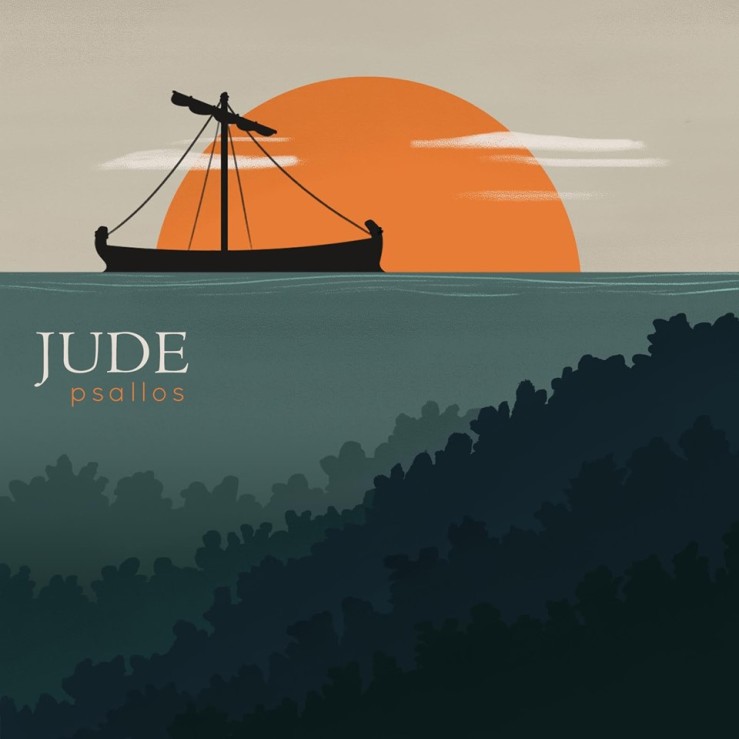 After bringing us Romans and Hebrews (read my reviews here and here), Psallos has now released Jude, a half-hour musical journey through all twenty-five verses. The lyrics, music, and orchestration are by Cody Curtis, a doctor of musical composition who founded Psallos to proclaim scripture through artful song and who endeavors to adapt all twenty-one New Testament epistles. The vocalists are Thomas Griffith and Kelsie Edgren.

As in Psallos’s previous two albums, there is so much musical interest here, from a video-game-esque adventure theme (“fight”) and a sea shanty to a wispy waltz and a mournful lullaby to jazz and blues and even a portion reminiscent of traditional East Asian music. Curtis’s sense of play comes out in this variety of genres, which move us along the arc of the book. The music captures all the drama and shade of Jude’s rhetoric—denunciations (including allusions to historical rebellions and an angelic dispute), exhortations, and promise and blessing. The lyrical content is likewise skillful and rich. Importantly, all the words are intelligible throughout, sometimes even colored with vocal inflections and/or instrumentation, such as with wind, creeping, woe, and gloomy and utter darkness.

The track titles are all wonderfully poetic, many of them taken straight out of Jude 12 and 13 (ESV), where they serve as metaphors for false teachers: “hidden reefs,” “waterless clouds,” “fruitless trees,” “wild waves,” “wandering stars.” These evocative images form the basis of the first trailer for Jude (video text by Cody Curtis):

Deceivers lurk beneath a veneer of Christianity, threatening to run aground our “most holy faith” (v. 20) without our even noticing; their promises are empty (cf. Prov. 25:14); fruitless, rootless trees they are, lacking stability, bearing nothing of substance; they are like the restless waters of the sea that cast up dirt (cf. Isa. 57:20); they are, as Eugene Peterson translates, “lost stars in outer space on their way to the black hole” (v. 13, MSG).

Jude opens with the sound of a play button being pushed on an old audio cassette player, which activates a series of recorded testimonies. It’s as if the words are being played back by an investigator who has interrogated the early church community to which Jude wrote. “We wondered at times if God was able to keep us . . . or would he lose us,” speaks the first man on the tape. Fast-forward. “He said we needed to fight.” Fast-forward some more. “They would come. He said they were already here.” This establishes the courtroom conceit that’s woven throughout the album, no doubt inspired by Jude’s legal language—terms like condemnation, convict, guilt, blameless, punishment, and judgment.

Mimicking the literary structure of Jude’s epistle, the album is arranged as a chiasm, which means a sequence of ideas is presented and then repeated in reverse order, creating symmetry. You can hear this in the music, with melodies from the second half reflecting back to earlier ones, but it becomes even more evident when you see the layout of expertly titled tracks: 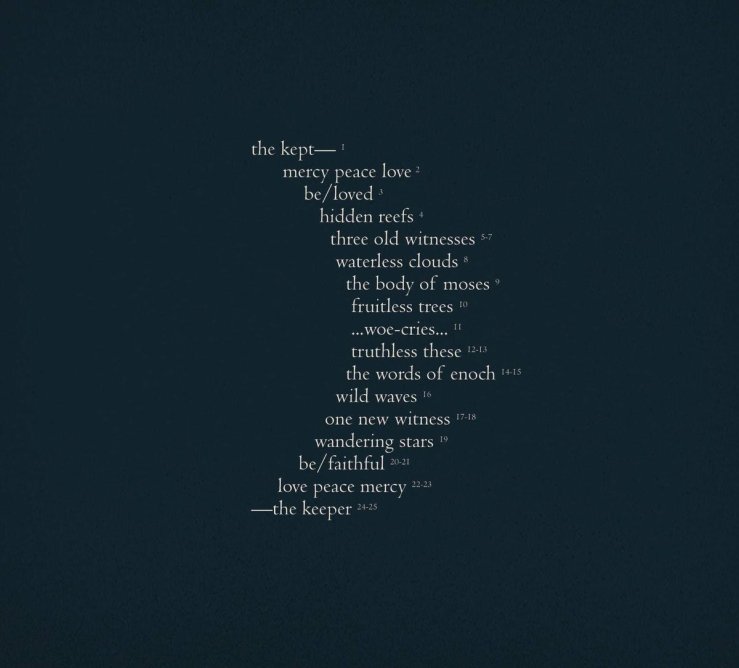 “…woe-cries…” is the hinge, a song that conveys urgency and menace. On either side of it you have “fruitless trees” and “truthless these.” (Psallos repeats the word these throughout the album, picking up on the shorthand Jude uses to refer to the false teachers.) Initially, “truthless these” sounds like a vocalise, a song of nonlexical vocables, but upon closer listening, one discerns the repetition of the word lie over the elegiac melody: “lie, lie, lie,” etc.

The next song-sandwich out, “the body of moses” and “the words of enoch,” draws on two apocryphal books implicitly referenced by Jude: the Testament of Moses (now lost) and 1 Enoch, respectively. The former recounts a struggle between the archangel Michael and Satan.

Jude also references stories from the Hebrew canon—stories of punishment. In “three old witnesses,” these stories are recalled one by one on the witness stand: of the exodus generation of Israelites who grumbled against God and were therefore forbidden to enter the promised land, of the rebel angels who were expelled from heaven, and of Sodom and Gomorrah, cities that God burnt up on account of their people’s immorality (smoke still rose from the ruins at the time of Jude’s writing). In addition, Curtis creates intertextual links with the book of Hebrews by integrating musical themes from Psallos’s Hebrews album (“Wandered,” cf. Heb. 3:16–18; “The Angels’ Moment in the Sun”).

As we look back to these scoffers of the past, we must also be on guard against the scoffers of today, about whom the apostles of Christ warned us—hence track 13, “one new witness” (the “one” being the apostles’ teachings taken as a whole). The pentatonic scale suggested by the spoken “Next witness, please!,” and subsequently voiced in the cello, in track 5 is here developed more fully, flowering into a tune that sounds exotic to Western ears, accustomed as we are to a heptatonic (seven-note) scale.

Another conceit besides the courtroom that’s employed in Jude is the church as ship, which comes across most vividly in the nautically themed “hidden reefs.” The musical basis of this song is “Roll the Old Chariot Along,” a traditional work song sung by rowers on the galleys of ships, its steady rhythm promoting unity of motion. Since ancient times, ships have served as a symbol of the church, a vessel of salvation navigating the choppy seas of this world, carrying its passengers to harbor, its cross-shaped mast lifted high. In traditionally designed churches, the area between the narthex and the sanctuary is called the nave, from the Latin navis, “ship.” Jude, though, warns that underneath the hull of the church are obstructions that we must be careful to navigate around if we are to avoid shipwreck as we steer this “old chariot” home.

Jude’s tone is severe against the would-be ship-wreckers, but Curtis inflects some of Jude’s rebukes to weave a more complex emotional fabric. For example, one of my favorite songs is “wandering stars,” which is essentially a lament for division within the church. Played with rolled chords on the piano and a mournful violin, it conveys sadness rather than outrage:

Even though the core of Jude is a judgment oracle, the epistle is not unrelievedly harsh. In addition to the shade Psallos brings out in the middle, there’s a softness at both ends as we are assured that God holds his own eternally in his love. In track 16, “love peace mercy,” Psallos mirrors the language of blessing in Jude’s opening, rendering the final exhortation as a benediction to those who have fallen (or who are on the brink of falling) into dangerous error or sin: “Let there be . . .” The unfolding of the word love in this song is sublime. It reaches and reclaims.

While the letter opens with a greeting “to those who are called, beloved in God the Father and kept for [or by] Jesus Christ” (v. 2), it concludes with a doxology to “the keeper.” We are kept from stumbling by the One who has all “glory, majesty, dominion, and authority” (v. 25).

With its heavy emphasis on damnation and its apocryphal references, Jude can be a difficult book to work through, but Psallos makes it accessible, bringing out the sharpness, yes, and the urgent call to resistance, but also the tender care in which God enfolds us, and the promise of salvation to those who persevere in the gospel against its attackers. Jude the album has driven me back to Jude the epistle with a new understanding of its design and an appreciation for its beauty and importance. It has thrown into relief certain verses that I would have otherwise blown right past, helping me to dwell there and to really hear the Word. As with Romans and Hebrews, I will continue to hold Jude in hand as a supplement to my biblical studies.

To stream and/or purchase Jude by Psallos, visit https://www.psallos.com/jude. Also available on iTunes and Spotify.

If you want to support Psallos in their work (which really is unique in the landscape of faith-based music; no one else is doing what they do), please consider becoming a monthly patron through Patreon. As such, you will receive digital music downloads, videos from Cody Curtis explaining some of the musical intricacies of the albums, and other perks. This funding will enable Psallos to create their next epistle adaptation, which has yet to be announced.

One thought on “Album Review: Jude by Psallos”