This is the final installment of a series on the Christians in the Visual Arts (CIVA) conference held June 13–16, 2019, at Bethel University. Photos are my own. [Read part 1 and part 2.]

Here I’d like to share some of the art that was created at and/or on display at the conference. This is just a small snippet.

When I first crossed his path Thursday evening, printmaker and draftsman Steve Prince had unfurled a large sheet of paper across the wall of the George K. Brushaber Commons and was drawing in charcoal and graphite. A label taped up beside it gave the title: Prayer Works.

After Prince established the framework of three women quilting, he invited passersby to choose a quilt patch and fill it in with a pastel design of their own. (Though it was very much a low-pressure, “come one, come all” atmosphere, my self-consciousness, and my not being an artist, prevented me from making my mark. Something I need to get over . . .) It was fun to watch the work evolve over the weekend.

When I left on Sunday, this is what it looked like: 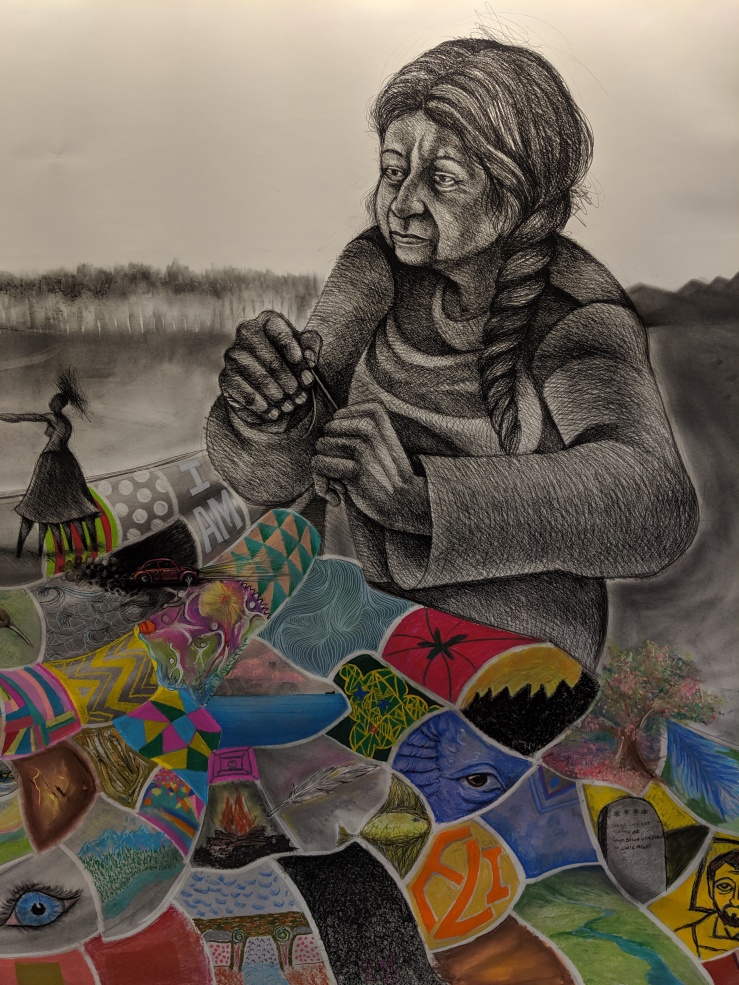 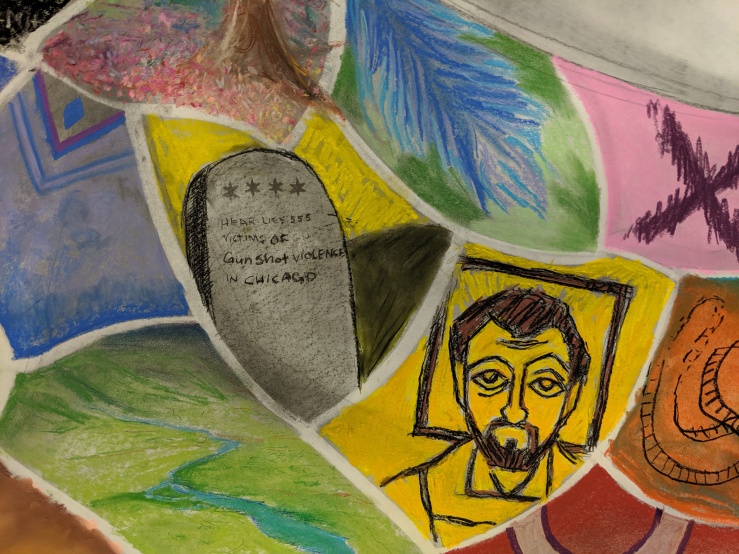 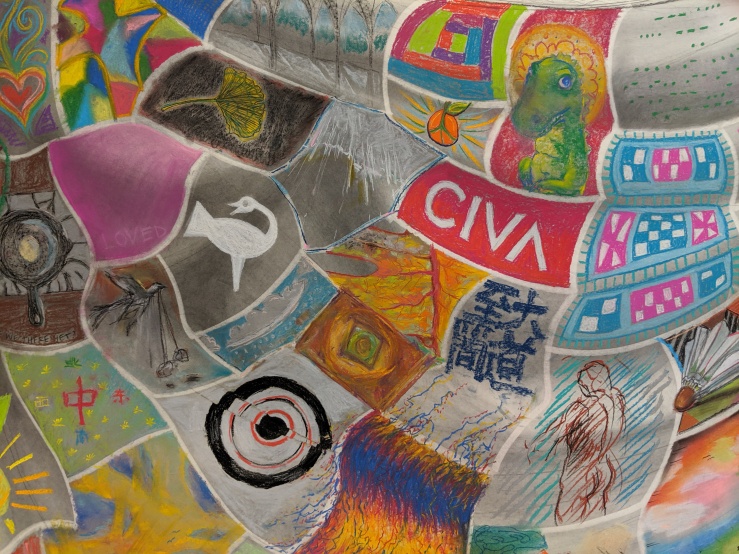 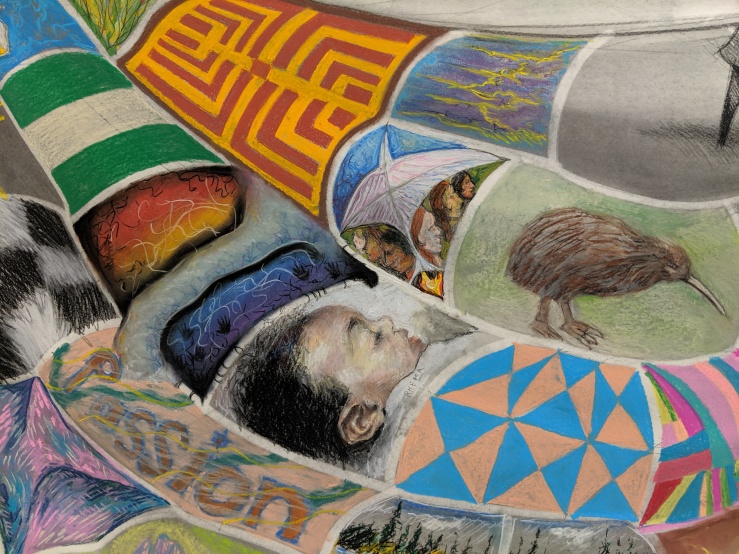 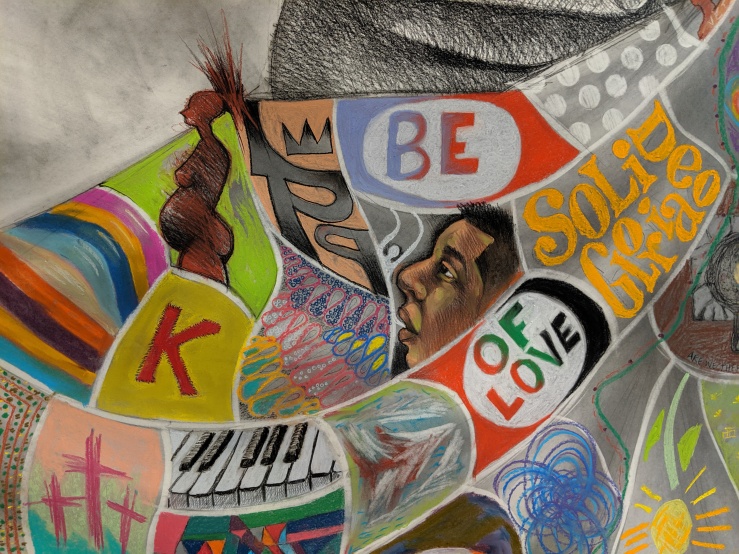 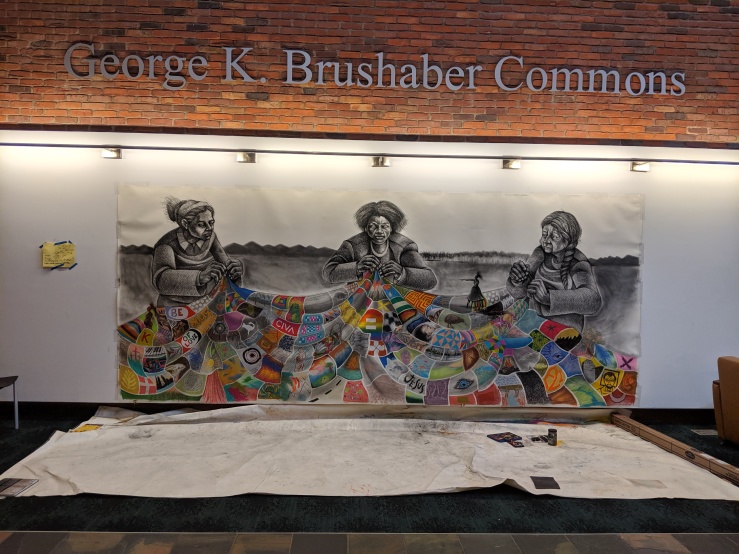 Though he has an independent studio practice, Prince is especially passionate about facilitating community art projects—for example, Urban Stations of the Cross (2016), a collaboration between himself and participating members of Sojourn Community Church in Louisville, Kentucky, resulting in fourteen linocuts installed along the walls of the sanctuary. Or the Urban Garden project that capped off Prince’s residency at SUNY Geneseo this January and February. He’s also done a lot of work with grade schools and is great with working with people of all ages.

Prince had a work up for auction at the CIVA conference: a 2017 lithograph titled Salt of the Earth, based on a seminal moment in US civil rights history. On February 1, 1960, four African American college students sat down at a lunch counter at F. W. Woolworth’s in Greensboro, North Carolina. When they were refused service and asked to leave, they remained in their seats—an act of nonviolent resistance that ignited a youth-led movement of sit-ins all across the South, challenging racial inequality.

Blessed are the peacemakers, for they shall be called sons of God.

Blessed are those who are persecuted for righteousness’ sake, for theirs is the kingdom of heaven.

Blessed are you when others revile you and persecute you and utter all kinds of evil against you falsely on my account. Rejoice and be glad, for your reward is great in heaven, for so they persecuted the prophets who were before you.

You are the salt of the earth, but if salt has lost its taste, how shall its saltiness be restored? It is no longer good for anything except to be thrown out and trampled under people’s feet.

In Prince’s lithograph, protesters Ezell Blair Jr., David Richmond, Franklin McCain, and Joseph McNeil are portrayed as peaceful warriors, wearing badges that read “AOG”—Agent of God, as I once heard Prince explain. (This acronym is found in several of his works.) As they are reviled and persecuted, they remain steadfast and do not retaliate, representing the Christ who likewise was persecuted for righteousness’ sake.

Christ’s Spirit, symbolized by a dove, is resting on the counter. Around him are what look to be mini-tombstones, bearing inscriptions like “Love,” “Free,” “Truth.” These are all values associated with the Spirit (Rom 5:5 and 2 Tim 1:7; 2 Cor 3:17; Jn 15: 26) and also ones for which African Americans activist fought and died. You’ll notice that the cross-topped “tombstone” bears a chi (X) for Christ.

Social justice is a key theme in Prince’s oeuvre, including the large linocut of his that I bought at a CIVA auction several years ago.

Another artwork at the CIVA conference that invited participation was Tim Lowly’s Without Moving (after Guy Chase). A multiyear project begun in 2009, it’s a portrait of the artist’s daughter Temma, who was born with severe disabilities, surrounded by a field of hundreds of thousands of tiny black dots. These dots, applied meticulously with a paintbrush by Lowly and other participants over the years, signify the contemplative presence of others surrounding Temma, enfolding her. One woman I talked to said her favorite part of the conference was having the honor to participate in this important work; she said it felt very intimate and connective, and like a form of prayer. Learn more and see more photos at the CIVA blog and the artist’s website. After the conference, Lowly declared the painting complete.

Because I had a few hours to kill before my Sunday evening flight, I spent the afternoon at the Minneapolis Institute of Art—and discovered that the museum has a Lowly painting in its collection! Titled At 25, it, too, was collaborative. The gallery label reads, “At 25 is a collaborative work commemorating Tim Lowly’s daughter Temma’s 25th birthday. She has been the subject of his work since birth, and he has explored his relationship to her as father and caregiver as Temma was born with severe physical disabilities. Lowly considers Temma a creative collaborator in his work and invited friends to contribute to this icon to her life.” (Those friends include Makoto Fujimura, Tim Hawkinson, Bruce Herman, Catherine Prescott, and others.)

Lowly writes, “The piece is composed of 25 sections, each of which is painted by one or two artists from around the world. For the ‘portrait’ side of the image I provided the participants with a section of a photograph corresponding to the piece they were given. I also gave them black-and-white matte acrylic (the paint I usually use) and asked them to render the photograph as stylistically neutrally as possible. For an artist to set aside their ‘style’ is a significant gesture, and as such I am very grateful for how willingly and sincerely the participants took on this part of the project. For the back side of the work the directive was much more open: ‘make it gold.’ As anticipated, the result of the back was very eclectic and (friendship) quilt-like.”

I didn’t get a photo of the reverse side, but you can view it here.

Above I mentioned an auction. There were many fine lots. I bid on Sandra Bowden’s Law and Gospel collograph but didn’t win.

The artist’s description reads, “With one additional horizontal cut, the tablets of the Law become four quadrants, suggesting a cross. Jesus said he came to fulfill the Law. When we have finished an item on our list of things to be done, we put a line through it, marking it done. This is what I was thinking as I took the Law, marked it done, with a horizontal line, only to see a cross appear.” Bowden created the textured surfaces by layering gold leafing on the Hebrew text collagraph print, then adding colored iridescent Cray-Pas to the raised areas.

Wayne Roosa’s Tract also caught my eye—an eraser print that quotes Giotto’s Lamentation over the Dead Christ. It belongs to his “Ideas of Order” series of rubber stamp images, which, as he says, “use iconic elements from newspapers and art history, combined and recombined, to suggest symbolic/narrative meaning for our culture’s various structures of order. Here, the microphone, surrogate for figures in power, privilege, or influence, rises out of a trap door abyss, while three angels (from Giotto’s Arena Chapel) grieve over the state of ‘truth’ and discourse.”

While I was at Bethel, there was a CIVA-sponsored exhibition in the Olson Gallery, The Beautiful, which ran from April 23 to June 16. (This was in addition to a juried show and a walk-in show put together specially for the conference.)

Here are a few notable artworks from The Beautiful:

I learned about Jennie Kimbrough’s “And the Word Was God” series, in which she uses pages from a 1920s German Bible, purchased at a flea market, not only as inspiration but also as her substrate, painting and stitching atop them as a devotional response to the text. Untitled 14 (Daniel 3:7–30) shows the three youths in the fiery furnace, with a fourth figure mysteriously present among them.

I also spent time at the video installation Belgium / Minnesota (for Henry) by Michelle Westmark Wingard. Shot over a four-hour period and then time-lapsed, it shows the movement of sunlight through a window and across the wall as the day progresses. The decal on the window is the horizon line she extracted from a photograph of a Belgian field, where her grandfather’s plane crashed during World War II; placed over the existing horizon line, it creates an interesting interplay. The artist said she intends the video as “a study of contrasts: light/dark, real/imagined, manicured landscape/wild natural landscape, static/ever-changing” and “a visual dialog about landscape, longing, and the passing of time.”

I love how this piece takes something as ordinary as sunlight and invites us to really notice it, to receive it as something more than a mere commonplace—as a wonder, or even a grace.

Artists are great at noticing beauty that others of us would simply pass by. The day I arrived at the conference, I was walking with my roommate to the dorms when suddenly she stopped in the road with wide eyes and open mouth. I assumed she was reacting to the herd of goats in the near distance, fenced off behind a small chapel—an unexpected and amusing feature of a college campus. (They were brought in last year, I later learned, to help manage an invasive plant species, buckthorn.) But it turns out she was responding to the way the sun’s rays were falling through a tree. “Isn’t this beautiful?” she kept saying, approaching for a closer look and pausing to take it in. She snapped multiple pictures from different angles so that she could paint it later. And here I was, only noticing the goats! Until this new artist friend of mine redirected my attention to something more subtle but equally as delightful.

The Are We There Yet CIVA conference this summer was so rewarding, and these three blog posts, built as they are around works of art, don’t encapsulate the full experience. But they provide a taste of what you might expect to encounter were you to attend a biennial conference in the future.

I’d encourage you to listen to the fifteen-minute interviews conducted at the conference by Libby John of the podcast Art & Faith Conversations. She talks not only to artists but to an arts administrator and an art book publisher, all CIVA members: